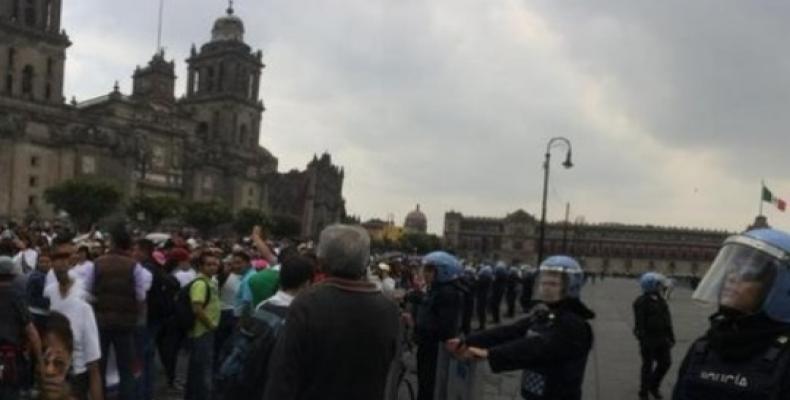 After the reform came into affect in 30 states Saturday, people in the Mexican states of Jalisco, Oaxaca, Guerrero and Hidalgo participated in the mobilization. In Jalisco, over seven thousands were reported to march in Guadalajara. In Mexico City, a small group of citizens handed a document listing their demands to the customer service office at the Presidency.

Teachers are primarily concerned about the bill’s introduced teacher evaluations, which striking teachers have marched against in recent weeks. Under the new systems, teachers would be evaluated to determine if they can remain in the education system and if they can apply for different posts or demand salary increases. They say the new evaluation system aims to facilitate layoffs and is detrimental to good working conditions.

Victor Rodriguez, from CNTE teachers’ union, told local press teachers are rejecting the “punitive evaluations,” as well as the modification of two constitutional articles, which “violate our labor rights and the guarantee of a quality education for all.” They explained they were not against evaluations themselves, but the way it will be implemented: “Educational or Labor Reform?” is a common slogan at marches. Teachers say the evaluations will not actually measure teaching skills or take into account the special knowledge needed to teach in rural areas and indigenous communities.