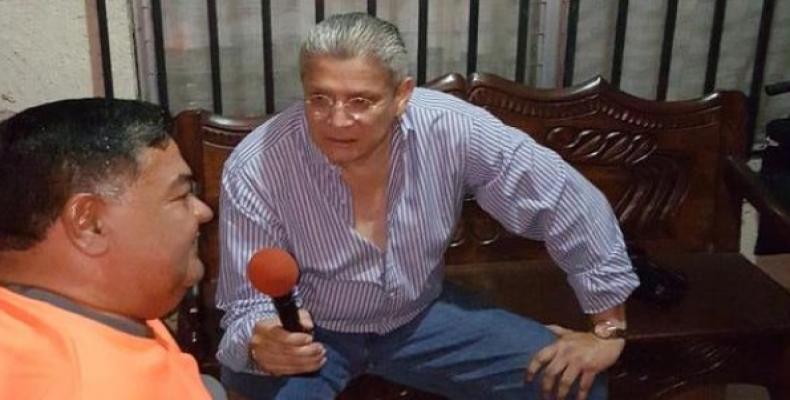 Tegucigalpa, July 29 (teleSUR-RHC)-- A judge presiding over the case of journalist David Romero, who is awaiting a sentence over charges related to his exposed corruption in the Honduran government, has accused the government of threatening him and other justices to hand the reporter a prison sentence.

In an interview with Honduran journalist Esdras Amado Lopez on Wednesday, who is also involved in unveiling the scandal, Judge Jose Echenique admitted a string of irregularities had hampered Romero's trial.

Echenique alleged that while he was in charge of the case, he was called into a meeting with the vice president of the Honduran Judiciary Council, Teodoro Bonilla, who told him “‘the man’ wants the journalist to be convicted,” referring to President Juan Orlando Hernandez. The judge continued that Bonilla said: “‘But not only does he want him convicted, he wants him imprisoned. So that this serves as a deterrent to that other idiot.’ ‘Who?’ I asked, and he told me, Esdras.” Some time after the meeting, Judge Echenique was taken off the trial allegedly due to illness.

Globo TV reporter David Romero was charged with crimes including defamation and dangerous slander against Sonia Galvez, wife of Attorney General Rigoberto Cuellar. Romero broke the story of how the ruling National Party received $90 million of an estimated $300 million stolen from the Honduran Social Security Institute. The money, they claim, funded Hernandez’s costly 2013 presidential campaign against Xiomara Castro, wife of former President Manuel Zelaya who was removed from office as a result of a U.S.-backed military coup.

The funds were apparently siphoned off through fake businesses, some of which wrote checks to the party and jacked up prices to fund kickbacks. Bonilla denied the accusations leveled by the judge, and claimed that he was lying.