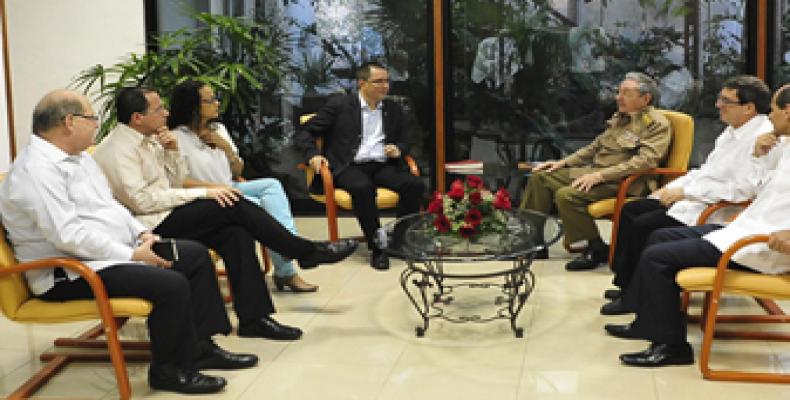 Havana, February 2 (RHC)--Cuban President Raúl Castro met Thursday in Havana with Venezuelan Foreign Minister Jorge Arreaza, who is currently on a working visit in the Cuban capital, the first leg of a tour of several countries of Latin American and the Caribbean.

During the meeting, the Cuban president and Arreaza highlighted the excellent state of bilateral relations and exchanged on current issues in the area.  The Cuban president reiterated the unwavering solidarity of Cuba with the Bolivarian Revolution and President Nicolás Maduro, as well as the island´s "confidence in the capacity of the people of Venezuela and their civic-military union to face the current challenges," an official note said.

Also present were José Ramón Machado, vice president of the Councils of State and Ministers, and Bruno Rodríguez, Minister of Foreign Affairs.

The Foreign Minister also attended a rally of solidarity with the people of Venezuela held at Havana´s University of Computer Sciences (UCI).

In his address to participants, he said that there are several battles that Cuba and Venezuela will have to wage together, and he expressed optimism about the two countries capacity to overcome all challenges.