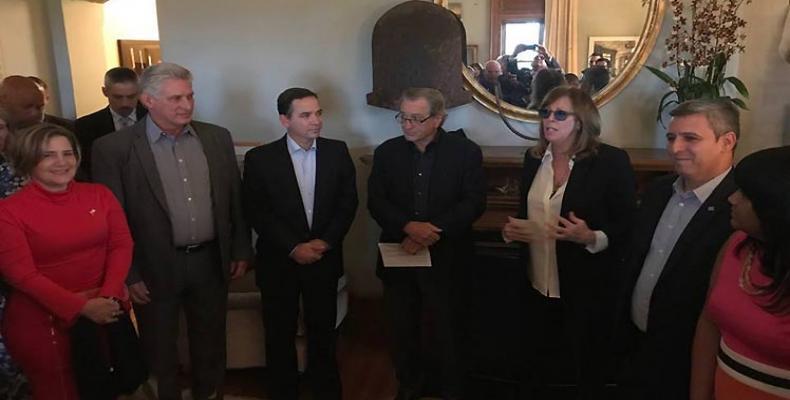 New York, September 29 (RHC) – President Miguel Diaz-Canel met Friday with artists, philanthropists and cultural promoters of the United States, as part of his agenda in New York attending the sessions of the UN General Assembly.

Jane Rosenthal, co-founder of the Tribeca Film Festival, and actor Robert De Niro, welcomed the Cuban leader in the iconic Dakota building of New York. "Good neighbors do not build walls, let culture help build bridges," said Robert De Niro, a star in films like The Godfather II and Raging Bull. De Niro said he had been in Cuba twice and spoke highly of the Cuban people.

The Dominio Cuba web channel said Díaz-Canel had words of appreciation for the artists and pointed to the recent Cuban arts festival at the Kennedy Center in Washington.

He stressed the importance of promoting new actions and cultural encounters that could bring the two countries closer together, and invited the US artists to bring the best of American creation to Cuba, to showcase their productions and help strengthen the ties between the two peoples above political or ideological differences.

The president provided an overview of the Cuban arts education system, noting that in spite of the hurdles of the US economic circle against Cuba, education, including in arts, remained universal and free on the island.

The Cuban leader had met earlier on Friday with senior executives of the US Chamber of Commerce and the US travel industry, where the prevailing mood was for the elimination of prohibitions on Americans visiting the neighboring island-nation.