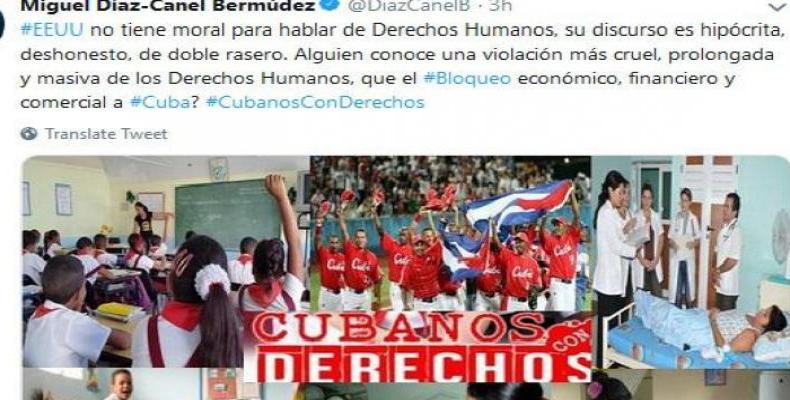 Havana, December 12 (RHC)-- Cuban President Miguel Díaz-Canel condemned in a tweet the document published by U.S. Secretary of State Mike Pompeo on December 10th, in which he accuses the Cuban government of violating human rights.

The Cuban leader described U.S. discourse on this issue as hypocritical, dishonest, and indicative of double standards, emphasizing that Washington has no moral authority whatsoever to talk about the issue, when it has imposed a prolonged economic, commercial, and financial blockade on Cuba, which constitutes a massive, cruel violation of human rights.

The Cuban head of state said: “while others export weapons and wars, Cuba shares knowledge, social services and the expertise of its professionals,” in a clear reference to the U.S. government's long history of advancing its national interests through the use of force.

Díaz-Canel further stated: “Our doctors and teachers have illuminated, and are illuminating, remote regions. Our currency is solidarity.”