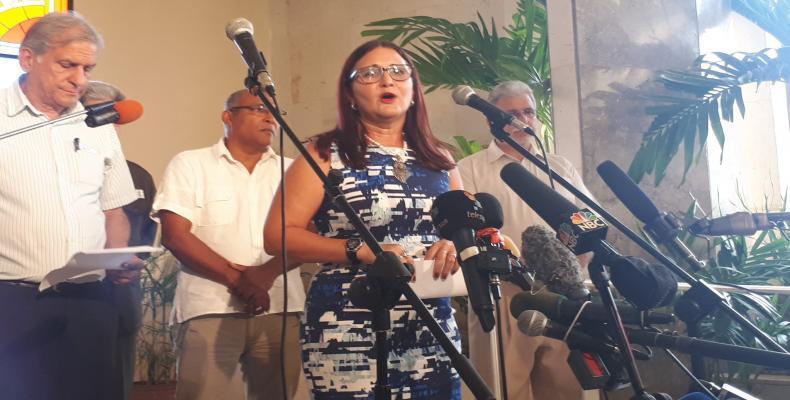 Havana, July 23 (RHC)-- A new scientific study published in the latest edition the Journal of the American Medical Association (JAMA) shows that there is no evidence of any kind of attack or act against diplomats in Havana.

Johana Tablada, Deputy Director of the U.S. desk of the Cuban Ministry of Foreign Relations (MINREX), spoke at a news conference Tuesday afternoon, along with other experts and medical professionals.  She underlined the fact that this latest study, published in the United States by the prestigious medical journal, shows that there is no reason to justify the closure of consular services and the explusion of Cuban diplomats from Washington.

Speaking to national and foreign journalists accredited here in Cuba, Johana Tablada said: "These coercive measures have had a high humanitarian cost in our population, forced to travel without guarantee to third countries to visit their relatives or participate in a professional event."  And the Cuban diplomat noted that many sectors in the U.S. have also suffered from these unjustified measures imposed from Washington.

Johana Tablada pointed out that the article published in the Journal of the American Medical Association "recognizes that the brain alterations (between diplomats and a healthy control group) are minimal, that the findings are not conclusive and that they cannot identify their causes."

The MINREX representative said: "However, John Bolton and the State Department in their public documents have maintained the irresponsible use of the term "attacks" when they know that there have been no attacks or deliberate acts against their diplomats in Cuba."  She added that these actions are "measures of aggression against Cuba, mounted on lies to fulfill perverse purposes of political domination."

"Cuba asks the United States government to put an end to the manipulation and use of this issue as a pretext to impose more and more measures of aggression against the integrity of our country, its economy and its people."

The deputy director of the U.S. desk at MINREX, Johana Tablada, concluded: "Cuba is a safe country for American diplomats and for diplmats of any country, as it is for Cuban citizens, for foreign residents and for the millions of travelers from all parts of the world who visit Cuba every year."

"Cuba is and will remain a safe, stable and attractive country.  It remains willing to develop a respectiful dialogue to cooperate in this and other issues for the benefit of both peoples."

The study, published in the July 23, 2019 edition of JAMA, the Journal of the American Medical Association, is entitled: "Neuroimaging Findings in U.S. Government Personnel With Possible Exposure to Directional Phenomena in Havana, Cuba."