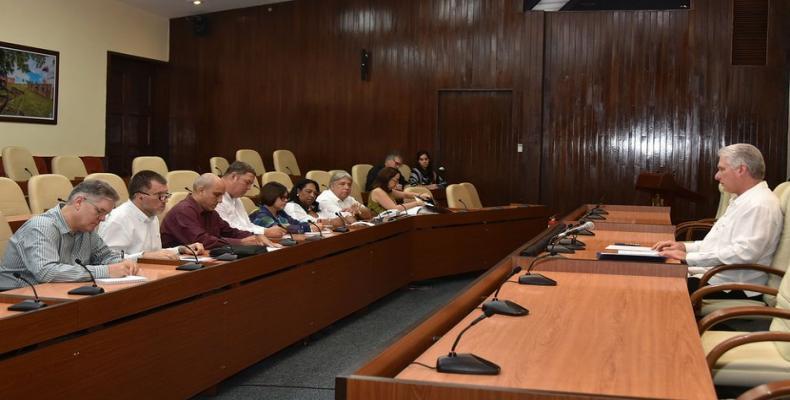 Havana, December 17 (RHC)-- Cuban President Miguel Diaz-Canel has highlighted the role of the National Association of Economists and Accountants of Cuba (ANEC) in the country's efforts to improve the economy.

At a meeting in Havana with ANEC's Executive Board, Diaz-Canel also commended the organization's capacity to bring together those who know more about these issues.

The president reiterated that the economy is the country's top priority, and ANEC has to support it with the knowledge of all its 80,200 members, reported the Cuban News Agency.

Diaz-Canel said the association's input could be vital in the elimination of barriers that currently obstruct the economic development, the improvement of the Socialist State Enterprise, and the development of the small and medium enterprises.

Díaz-Canel urged ANEC members to think about how to unleash production forces, both in the state and non-state sectors;  to make domestic trade more robust and satisfy the demands of the population; and to promote foreign investment, exports and production.

He also pointed out the contributions that ANEC's members could make with their research to the updating of the Cuban industry, to the strengthening of accounting, and the modernization of banking in the country.

Before concluding the meeting, the Cuban president stressed that it is necessary to take advantage of the year 2020 to promote new ideas that give a different dynamic to our economy.