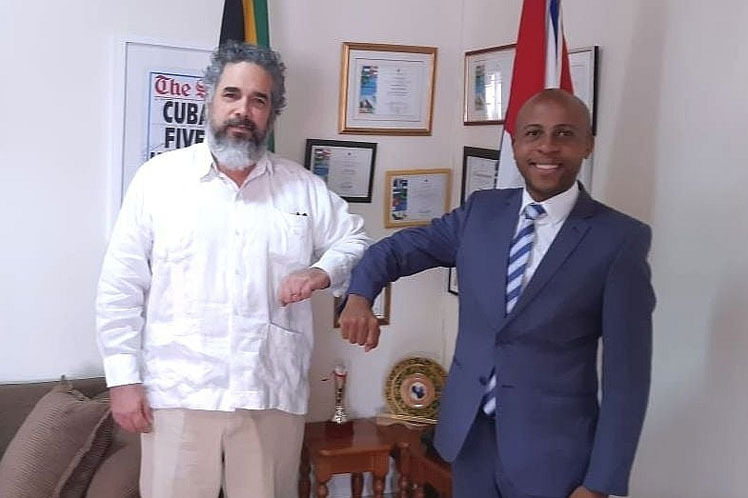 Cuban Ambassador to South Africa, Rodolfo Benìtez (Left) and the President of the Chamber of Commerce
and Industry of South Africa, Mtho Xulu. PL Photo

Pretoria, December 17 (RHC)--The President of the Chamber of Commerce and Industry of South Africa, Mtho Xulu, and his Cuban counterpart, Antonio Luis Carricarte, signed virtually an important cooperation agreement between both entities.

According to the text, among other obligations contracted, both Chambers will disseminate to businesspeople information on goods, services, and possibilities of association, especially in the sectors of agriculture, biotechnology, pharmaceuticals, industry/manufacturing, health, and education.

According to the document, signed on Wednesday from both capitals, commitments will be extended from company to company to promote commercial associations, mainly in those sectors.

The agreement states the two Chambers will collaborate to promote and participate in fairs and exhibitions and will jointly organize trade missions and visits by business people to increase investment, create joint ventures, and promising commercial opportunities for both countries.

Cuban Ambassador to South Africa, Rodolfo Benitez Verson, recalled how the two governments, at the highest level, agree on the need to rapidly increase and expand economic and commercial relations and investments to match the very high level of excellent diplomatic and political ties.

The signing of a cooperation agreement between the Cuban Chamber of Commerce and a similar one in South Africa, he said, is another important practical step in that direction.

For his part, Xulu stressed that the agreed memorandum will be the platform for the early creation of a Joint Cuba-South Africa Business Council. This mechanism will facilitate the rapid increase in trade between the two countries.

Likewise, he emphasized that the agreement opens the way for the intensification of Cuba's economic-commercial relations with the Southern African Development Community (SADC) countries.

On his side, Carricarte described the signing of the agreement as historical because of its favorable implications from the bilateral point of view and the trade of Cuba with the African continent as a whole.

The Cuban official extended an invitation to his South African counterpart to participate in the upcoming International Fair in Havana, scheduled for November 2021.

The South African Chamber of Commerce and Industry groups among its members more than 20,000 companies and business associations, many of which, according to Benítez Verson, have offers that may be attractive to Cuba.