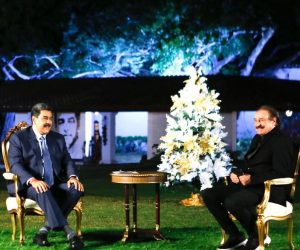 Caracas, January  2 (RHC) The President of Venezuela, Nicolás Maduro, highlighted on Friday the support provided by the Cuban Government and doctors to his country in the confrontation of  Covid-19.

During an interview granted to the French journalist Ignacio Ramonet, aired on  Friday by Venezolana de Televisión, the President pointed out that among the causes that made possible the adequate management of the pandemic in Venezuela is the existence of a primary health system.

Maduro said that the system results from the Barrio Adentro Mission created by the commanders Hugo Chávez and Fidel Castro.

He stressed that for 20 years, the island's health workers have been working in the South American nation. After the new coronavirus's scourge, the Cuban Government sent new brigades, which operated in the neighborhoods and communities.

He recalled how, faced with the appearance of the lethal disease, the big media and some nations predicted the national health system's collapse. Still, the country avoided that scenario by strengthening its primary health system and activating all the preventive medicine mechanisms learned from the Cubans, he stressed.

The Venezuelan head of state described the slander campaign around the subject waged against his country as a  psychological war and highlighted how all diagnosed cases received comprehensive  and free treatment, alongside the establishment of  strategies that allowed the neutralization of Covid-19,

We have built our preventive method based on the positive experiences of other nations such as Cuba, Vietnam, or China, but also on the negative ones such as those of the United States and Brazil.

Maduro assured that despite the necessary relaxation of December, there is a control of the disease and stressed that the massive vaccination will help improve the situation.