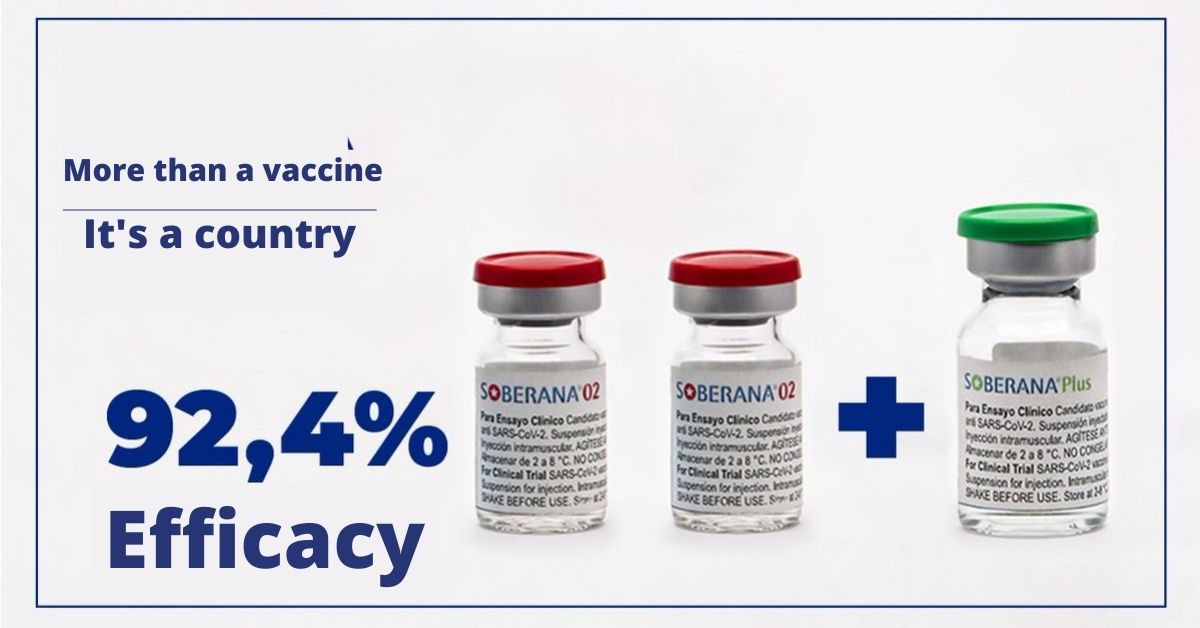 Havana, November (RHC)-- The Finlay Vaccine Institute (IFV) published an article on Monday, in which it released the final results of the study of the Cuban anti-Covid-19 vaccine, 'Soberana 02'.

The study shows the efficacy of 71 percent with two doses, and when a third dose of 'Soberana Plus' was administered, it reached 92.4 percent.

According to IFV, in charge of developing both immunogens, two doses of 'Soberana 02' were safe and reached 71.0 percent efficacy in the adult population aged 19 to 80 years.

"The addition of 'Soberana Plus' after the two previous doses increased that parameter to 92.4 percent," notes the article published in MedRxiv., the web repository for unpublished texts about health sciences. It distributes complete but unpublished manuscripts in medicine, clinical research, and related health sciences.

This Phase III study was a randomized, double-blind, placebo-controlled trial with some 44,31 volunteer participants.

During the trial, SARS CoV-2 isolates in Havana were predominantly of the Beta strain (74.0 percent) and gradually changed to Delta (100 percent), the material details.

In that epidemiological scenario, the authors describe two doses of 'Soberana 02' protected against symptomatic Covid-19 by 71.0 percent; for severe states, the efficacy was 63.0, and for death 59.0.

When adding the three-dose heterologous regimen with 'Soberana Plus', this indicator was 100 percent efficacy in protecting against severe cases and death.

This is the first Phase III clinical trial study of a three-dose heterologous vaccine combination against SARS-CoV-2," IFV scientists noted.

Previously, in July of this year, the institution had announced that the preliminary results of that scheme of 'Soberana 02' plus 'Soberana Plus' at 0-28-56 days had an efficacy of 91.2 percent.

During the presentation of these data, Vicente Vérez, Doctor of Science and Director of the Finlay Institute, informed that the figure referred to the capacity to prevent symptomatic disease of Covid-19.

The article says the result was validated in phase III of the clinical trial carried out in eight municipalities of Havana, precisely when the Beta strain (originally detected in South Africa) was massively circulating in the Cuban capital.