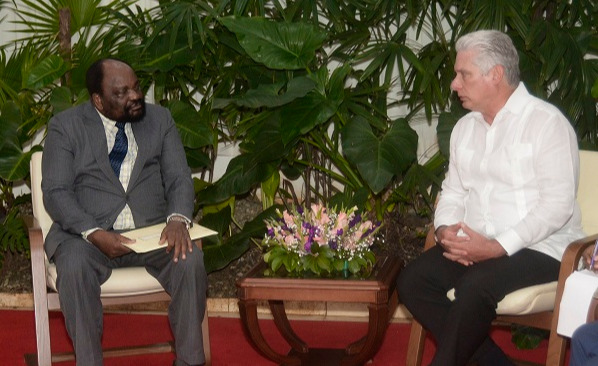 The dialogue took place at the Palace of the Revolution. Photo: @PresidenciaCuba

Havana, July 11 (RHC)-- The First Secretary of the Central Committee of the Communist Party of Cuba and President of the Republic, Miguel Díaz-Canel received on Monday Simbarashe S. Mumbengegwi, member of the Political Bureau of the Zimbabwe African National Union-Patriotic Front.

During the meeting, the Cuban leader highlighted the historic relations between the two countries, which date back to the times when that African nation was fighting for its independence.

Information from the Presidency of the Republic of Cuba released on Twitter indicated that the meeting was also attended by the Cuban Foreign Minister, Bruno Rodriguez.

The also special envoy of the president of Zimbabwe met with the member of the Political Bureau and Secretary of Organization of the Central Committee of the Communist Party of Cuba, Roberto Morales, and they agreed to consolidate bilateral cooperation.

Cuba and Zimbabwe established diplomatic ties in 1980, when the African country achieved its independence, a process in which Mumbengegwi participated, who has visited Havana on several occasions, the most recent of them in 2019.

Both nations develop cooperation projects, mainly in the health and education sectors, and collaborate in international organizations in condemning unilateral coercive measures, of which Havana and Harare are victims.