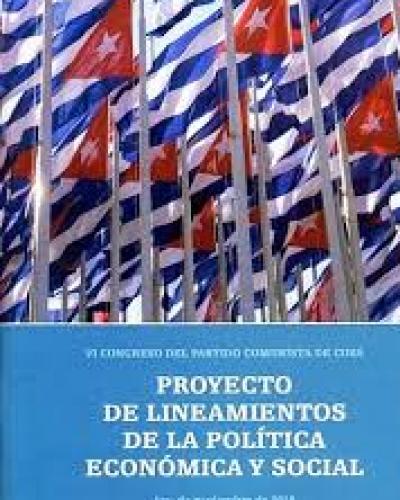 From the “Special Period” to the New Social and Economic Model

The continued support by the people for the Cuban socialist project during the “Special Period” of the 1990s was based in confidence in the commitment and capacities of the Cuban revolutionary leadership, and in the recognition that any surrendering of economic policy to the interests of Washington would make the situation worse for the great majority. Put simply, the people had faith in Fidel and Raúl; and they knew that influential persons in Washington and Miami did not care about them.

The persistence of the Cuban Revolution is one of the significant political developments of the beginning of the twenty-first century. Certain characteristics of the Revolution were decisive in creating and maintaining committed popular support, including: first, exceptional political leadership; secondly, an alternative political process that puts political power in the hands of the delegates and deputies of the people; thirdly, the active presence of mass organizations; fourth, a mass media that sees its role as contributing to the construction of a socialist society; and fifth, a single political party that is capable of guiding and educating but not imposing.

But there were challenges. There occurred during the Special Period a slight erosion of revolutionary commitment among the people, which expressed itself as the people learned in experience how deep the economic fall would be, and how long it would last. There emerged an underlying discontent with the limited income of the people and the low material level of living conditions. The underlying dissatisfaction did not reach such a level that it created a political crisis. It was a question of a dissatisfaction, not the formulation of a counterrevolutionary ideology or a post-socialist discourse. And there persisted a solid twenty-five percent of the people that were party members and their committed supporters, who were prepared to make any sacrifice in defense of their socialist revolution. But the underlying material dissatisfaction was a source of concern for the Party leadership.

The discontent was to some extent a problem of rising expectations. The slow but steady recovery from 1993 to 2001 was driven in part by tourism and emigration, which gave rise to a popular tendency to use the consumer societies of the North as a frame of reference. Greater personal contact with the consumer societies of the North contributed to the rising material dissatisfaction among the people, even as material needs were increasingly met.

The Party interpreted this phenomenon as a problem of the objective and subjective conditions in which the Cuban socialist revolution finds itself. The nation is attempting to construct socialism in the context of a capitalist world-economy with which it must have relations if it is to satisfy the basic material needs of the people, a capitalist world-economy in which the leading economies are consumer societies. It would be unrealistic and utopian to think that the Cuban people, in this situation, would not desire consumer items that are widely distributed in the consumer societies of the North, especially those that do not have excessive ecological costs.

The response of the leadership to the underlying material discontent of the people was to make efforts to satisfy the material desires of the people, seeking to create a “prosperous” socialism. The Party formulated Guidelines for a new economic model that it disseminated to the people, and it led the people in popular consultations throughout the nation. The revised Guidelines were submitted by the Party to the National Assembly of People’s Power, which approved them in 2012 as the Guidelines of Social and Economic Policy.

The 2012 Model intends to improve efficiency in the production and distribution of goods and services, to increase domestic industrial and agricultural production, and to increase the capacity of state enterprises to attain productive goals. To these ends, it expands cooperatives to non-agricultural sectors, and it expands self-employment and small-scale private businesses. There are less restrictions with respect to foreign investment, and wages are connected to productivity. In addition, there has been decentralization of decision-making for provincial governments and state companies, in accordance with the national plan and priorities.

It should be understood that these measures are not concessions to a national bourgeoisie or to foreign capital; they are concessions to the people, and they are made with the belief that they will improve production for the benefit of the people. They do not constitute a turn to capitalism, but a turn to an expansion of private property in the context of a socialist economy.

The concessions to the people with respect to self-employment and small-scale capitalism reflected an unfolding dynamic. For years in Cuba, many persons created concrete ways to improve their material circumstances, including working informally as small-scale retail traders and independent service providers in such trades as carpentry, plumbing, house repair, hairdressing, taxi driving and cafeteria services. In Cuba prior to 2012, there was limited space for such individual entrepreneurship in the formal economy, so many engaged in such activities as an unofficial, but not necessarily illegal, informal economy. The 2012 Model incorporates the informal economy into the formal. It recognizes small-scale entrepreneurial work as a legitimate part of the formal economy, so that licenses in these trades and services were emitted in much greater numbers, with rules for reporting activities and income.

The Party and the government have taken the view that dignified individual work has a place in a socialist society, insofar as the workers are organized into labor organizations, and they are part of a society in which the principal institutions of the economy and the media are managed by the state, which is controlled by structures of popular democracy. The concession of small-scale entrepreneurship by the revolutionary leadership to the people illustrates the fact that the people and the party define socialism in practice, taking conditions into account.

Even as the Cuban revolutionary experience demonstrates challenges in forming the consciousness of the people in the context of a capitalist world-economy and consumer societies, it also demonstrates the possibility of creating a revolutionary vanguard, comprising roughly 25% to 30% of the people. Formed by the pedagogical discourses of Fidel and by educational institutions and the media, with the support of families with revolutionary traditions, these exemplary women and men have a solid understanding of national and international dynamics, and they have a strong commitment to universal human values. They serve as dedicated professionals in health, education, science, journalism, and other fields; and they serve as leaders in the mass organizations and in the political structures of popular power. They are central to the survival and continued development of the revolutionary project. They are of the people, for they come from all sectors of the people, and they are connected to the people, by blood, emotion and spirit. But a distinction can and should be made between the vanguard and the people.

The New Economic and Social Model of 2012 has stopped and reversed the slight erosion of revolutionary support. There was profound appreciation among the people for the sincere efforts of the Party to respond to the inquietudes of the people, and many embraced the new economic opportunities with enthusiasm. The revitalized support of the people for the revolution has been evident in various ways, including the active and dignified participation of the people in the development of the new Constitution of 2019; and in the self-sacrificing and unified response of the people, in support of the national plan, in the COVID-19 pandemic.