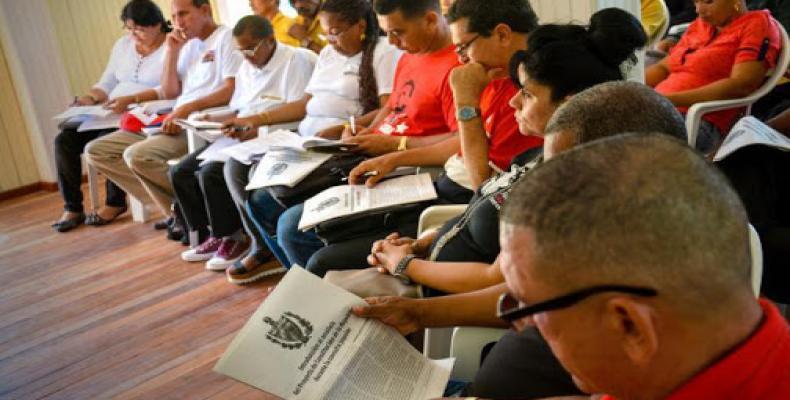 The Cuban Constitution of 2019

The Communist Party of Cuba had arrived to believe that the 1976 Constitution no longer corresponds to Cuban reality. Accordingly, the Party proposed the development of a new constitution. The National Assembly of People’s Power appointed a Constitutional Commission, which developed a draft and presented it to the Assembly, which made modifications and approved a draft for presentation to the people. An extensive popular consultation concerning the draft was conducted from August 13 to November 15, 2018. Some 133,680 meetings were held in neighborhoods and places of work and study. There were 8,945,521 participants, with an estimated two million attending more than one, so that the participation rate was approximately three-quarters of the population. There were 1,706,872 commentaries by the people, with 783,174 proposed modifications, additions, or eliminations. On the basis of the opinions and proposals of the people, the Constitutional Commission revised the draft. More than 50% of the proposals of the people were included in the modifications; nearly 60% of the articles were modified in some form. The Commission presented a report to the National Assembly, which further modified the draft and approved it for popular referendum.

The extensive, vibrant, high-quality, and dignified participation in the popular consultation inspired a Cuban daily newspaper to describe the process as “an entire people constructing their constitution,” through a people’s constitutional assembly. Television and newspapers provided extensive coverage, further stimulating popular awareness, engagement, discussion, and debate.

In their numerous commentaries, the people expressed approval of the socialist revolutionary road that has been in march since January 1, 1959. Some 62% of the interventions included some favorable expression with respect to the unfolding constitutional process. At the same time, there were a scant thirty expressions of rejection of the socialist character of the revolution; and there were only 262 proposals that rejected the definition of the Communist Party of Cuba as the guiding force of the nation. On the other hand, there were 4,802 proposals to change the name of the country to the “Socialist Republic of Cuba.”

Gay marriage was the theme most addressed by the commentaries of the citizens during the popular consultation. The draft proposed changing the 1976 language defining marriage from a union “between a man and a woman” to a union “between two persons.” Some 24.56% of the proposals addressed the issue, more than twice that of any other; and the theme was raised in 66% of the meetings. Overwhelmingly, the commentaries were against the proposed change. On the other hand, the proposed draft’s affirmation of the equal rights of all, regardless of sexual orientation or gender identity, did not provoke controversy.

In its final version, the Cuban Constitution of 2019 continues with principles and structures that have been evolving in Cuba since the revolutionary triumph of 1959. The Preamble of the new Constitution identifies with the historic Cuban struggle against slavery, colonialism, and imperialism for a free, independent, sovereign, and democratic nation, with social justice. It declares that Cuban citizens are determined to carry forward the Revolution that triumphed in 1959, guided by the ideals and the examples of Martí and Fidel as well as the ideas of Marx and Lenin.

The new Constitution affirms the socialist character of the Revolution and the nation. It proclaims that its socialism and its revolutionary social and political system are irrevocable. As in the Constitution of 1976, the new constitution names the Communist Party of Cuba as the vanguard party that organizes, educates, and leads the people toward the construction of socialism.

Like the Constitution of 1976, the new Constitution affirms the right of Cuba to sovereignty in international relations. It affirms Cuba’s foreign policy principles of sovereignty, anti-imperialism, and self-determination. It recognizes the need for the unity of the Third World in opposition to colonialism, neocolonialism, and imperialism. It reaffirms its commitment to integration and solidarity among the nations of Latin America and the Caribbean.

All revolutions and societies evolve, and the Cuban Revolution has evolved to be more inclusive, including all the people, regardless of sexual orientation, gender identity, or religious belief. Whereas the Constitution of 1976 affirmed the equality of all, regardless of race, color, sex or national origin, the new constitution expands the equal protection clause to include sexual orientation, gender identity, religious belief, or disability. This amplification of the equal protection clause of the Constitution is in accordance with international tendencies, and it reflects the evolution of Cuban society since 1976.

In recent years, the revolutionary leadership has moved toward embracing the international tendency toward affirmation of gay and transgender rights. However, its orientation has been to educate rather than to impose; it has sought consensus, with the intention of avoiding a conflictive divide among the people. In accordance with this orientation toward consensus, the new Constitution affirms the rights of all, regardless of sexual orientation or gender identity. It removes the traditional definition of marriage, found in the 1976 Constitution, as a union between a man and a woman; but out of respect for the sentiments of the people, the new constitution, as finally modified by the National Assembly, does not define the subjects that enter the marital relation. Instead, the Constitution mandates a popular consultation and a final popular referendum on a new family code, thus ensuring that the state will not impose laws and regulations not accepted by the majority.

The Constitution legitimates the changes introduced by the New Social and Economic Model of 2012, which had been developed by the Party through an extensive popular consultation and had been approved by the National Assembly of People’s Power. The new model reflected the need to improve the productive capacity of the nation, in response to a growing popular dissatisfaction with the material standard of living; and it legitimated a tendency among the people to engage informally in small-scale trading in goods and services. In essence, the new model expands self-employment, small-scale private property, cooperatives, and foreign investment, while maintaining state ownership as the principal form of property; it preserves the role of the state as manager and regulator of the economy.

The overwhelming support for the new constitution in the popular referendum of February 24 constitutes a vote for sovereignty, affirming the right of the nation to decide the characteristics of its political-economic system. It is a vote for democracy, confirming the structures of people’s democracy that have been developing since the early 1960s. And it is a vote for continuity, proclaiming that the passing from the political scene of the generation of the revolution only means the continuation by a new generation of the historic Cuban struggle for definitive sovereignty and social justice.