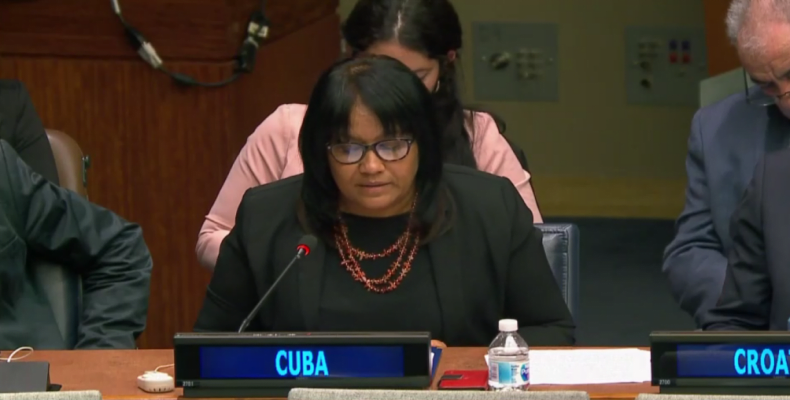 The following is the statement by Cuban Ambassador Anayansi Rodriguez, at the open debate of the United Nations Security Council on the situation in the Middle East, delivered on April 26, 2018.

We support the statement made by the delegation of the Bolivarian Republic of Venezuela on behalf of the Non-Aligned Movement.

Cuba expresses its serious concern about the perilous deterioration of the situation in the Middle East since the last open debate on this issue.

We reiterate our strongest condemnation of the criminal Israeli Army aggression against the Palestinian population in the Gaza Strip on 30 March, resulting in dozens of people killed and more than 4,000 injured. Such a brutal and disproportionate act is a grave and flagrant violation of the Charter of the United Nations and International Humanitarian Law, while exacerbating tensions in the region and banishing the possibility of any effort to resume Palestinian-Israeli peace talks.

It is deeply regrettable that due to the repeated hindrance of one of its members, the Security Council has failed to condemn these tragic events in the Gaza Strip; as well as to ensure respect for International Law and International Humanitarian Law, including the protection of the Palestinians, at a time when urgent action by the international community is required.

Cuba calls on the Security Council to fulfill its responsibility under the Charter of the United Nations in maintaining international peace and security, taking the necessary decisions and demanding the immediate end of Israel’s occupation of the Palestinian territories, its aggressive policies and colonizing practices, and its compliance with the resolutions adopted by the said body on the situation in the Middle East, including the Palestinian question, in particular resolution 2334 (2016).

We express our solidarity with the government and Palestinian people. We further reiterate the unwavering position of support for a comprehensive, just, peaceful and lasting solution to the Palestinian question, the core of the Arab-Israeli conflict, based on a two-state solution, to enable the Palestinians to exercise their right to self-determination, to an independent and sovereign State, with its capital in East Jerusalem and pre-1967 borders, and to the right of return of refugees. We will continue our support for Palestine to become a full member of the United Nations.

We also align ourselves with the strong rejection by the international community of the unilateral decision of the United States Government of declaring Jerusalem the capital of Israel. This is a serious and blatant breach of the Charter of the United Nations, International Law and the relevant resolutions of the General Assembly and the Security Council.

This decision, intended to change the historic status of Jerusalem, only seeks to undermine the legitimate interests of the Palestinian people and Arab nations.

Cuba further expresses its strongest condemnation of the new attack perpetrated by the United States and some of its allies on 13 April against military and civilian installations in the Syrian Arab Republic, on the pretext of the alleged use of chemical weapons by the Syrian Government against civilians in Douma, without the Syrian Government's use of those weapons having been demonstrated and prior to an investigation by the Fact-Finding Mission of the Organization for the Prohibition of Chemical Weapons (OPCW).

In the margins of the United Nations Security Council, this unilateral action and the Israeli attack on a Syrian airbase in the province of Homs on 9 April, constitute another flagrant violation of the principles of International Law and the Charter of the said Organization.

Cuba demands Israel's full and unconditional withdrawal from the Syrian Golan and all occupied Arab territories.

We reiterate that all measures or action taken or to be taken, which purport to alter the legal, physical and demographic condition and institutional structure of the Occupied Syrian Golan, as well as the Israeli measures to impose jurisdiction and administration in the said territory, are in violation of International Law, international agreements, the Charter and resolutions of the United Nations, including Security Council resolution 497 (1981) and the Fourth Geneva Convention

Cuba advocates constructive and respectful dialogue among the peoples of the region. Let interference in internal affairs cease, as well as foreign aggression and support for, financing and provision of arms to terrorist groups seeking to promote instability and conflicts in the Middle East. Let pretexts and concepts designed to legitimize in this Council the unilateral use of force and aggression against sovereign States be stopped. Let us respect multilateralism, strictly based on the purposes and principles of the Charter of the United Nations and International Law.

(SOURCE: Cubaminrex-Permanent Mission of Cuba to the United Nations)