Cuba calls on UN Security Council to fulfill its responsibility 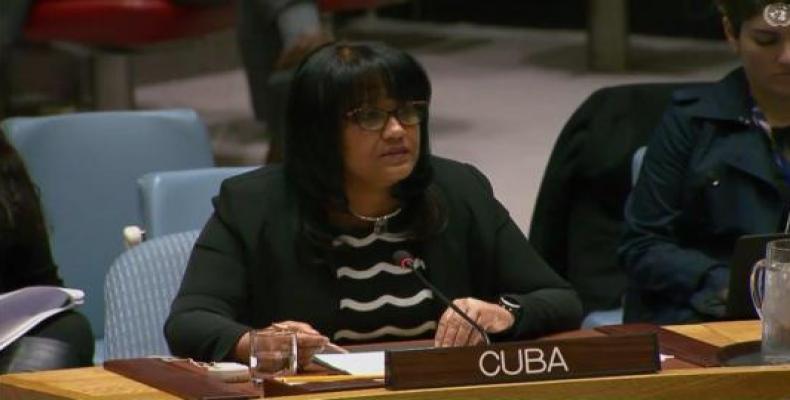 United Nations, April 27 (RHC)-- Cuba has called on the United Nations Security Council to fulfill its responsibility under the UN Charter in maintaining international peace and security in relation to the Middle East.

Cuba's ambassador spoke out against recent flagrant violations of the principles of International Law and the Charter of the United Nations that take place there, such as the Israeli attack on a Syrian airbase in the province of Homs on April 9th or other historic violations like the Israeli occupation of the Syrian Golan.

On behalf of the island, she reiterated the strongest condemnation of the criminal aggression of the Israeli Army against the Palestinian population in the Gaza Strip on March 30th, which resulted in the deaths of dozens of people and the wounding of more than 4,000 others.  She argued that this constitutes a grave and blatant violation of International Law, while exacerbating tensions in the region and banishing the possibility of any effort to resume Palestinian-Israeli peace talks.

Cuban Ambassador Anaysansi Rodriguez further noted that it is very regrettable that due to the repeated hindrance of one of its members, the Security Council has not even been able to condemn these tragic events or ensure the protection of Palestinians, at a time when urgent action is required from the international community.

In addition, Cuba's ambassador to the United Nations strongly condemned the new attack perpetrated by the United States and some of its allies on April 13th on military and civil facilities in the Syrian Arab Republic, on the pretext of the alleged use of chemical weapons by the Syrian Government against civilians in Douma, without any evidence of the use of such weapons by the Syrian Government and prior to an investigation by the OPCW Fact-Finding Mission.

The Cuban diplomat reiterated the need to maintain a constructive and respectful dialogue among the peoples of the Middle East and called for halting interference in internal affairs, foreign aggression and the support for, financing and provision of arms to terrorist groups which seek to promote instability and conflicts in the region.