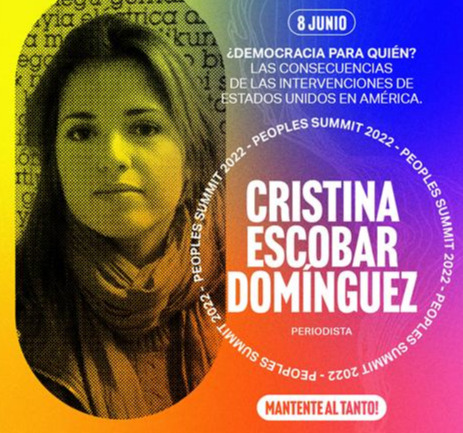 The first panel of the People's Summit in Los Angeles, opened Wednesday with a call for an end to the U.S. government's policy of suffocation against Cuba.

The first panel of the People's Summit in Los Angeles, opened Wednesday with a call for an end to the U.S. government's policy of suffocation against Cuba.

Democracy for Whom: The Consequences on U.S. Interventions in the Americas was the name of the panel, in which Cristina Escobar, an outstanding journalist of the Cuban Television Information System -- and here on Radio Havana Cuba, in our English-language broadcasts -- intervened on behalf of the Caribbean nation.

The young professional, who participated virtually because "the government of the country where this event is being held closed its doors to us." denounced the impact of the U.S. blockade on the island.   She recalled that her homeland is under the broadest and most complete system of sanctions ever imposed by the most powerful country in the world.

When the presidents of the United States and Cuba announced the reestablishment of diplomatic relations on December 17, 2014 -she noted-, it was an historic moment and "I could see a change of strategy, but not of purpose".

She pointed out that "not allowing this country to be fully independent, not accepting the path of social justice that we have chosen, those are stones locked in the core of all U.S. presidents since 1959".

Cristina Escobar argued all the damage caused by the unilateral blockade that has survived 11 White House administrations whether Democrat or Republican.

She stated that Donald Trump brought relations between the two countries to their worst point in the last 30 years, and Joe Biden left everything intact "without having the courage to elaborate his own strategy on Cuba."

Cristina rejected the coercive measures reinforced during the COVID-19 pandemic and recognizing that Cuba still has many internal challenges, she demanded the cessation of hostility coming from Washington.

"Let us live and discover the solution to our own problems," she concluded.

"Let Cuba Live, Young voices against the blockade"; "Solidarity beyond borders: Building an internationalism of the peoples" and "People before profit: Health as a human right all over the world", were the rest of the panels of the day at the People' Summit for Democracy in Los Angeles.

The voice of the Caribbean nation was heard in each of them.