People’s Summit for Democracy gets underway in Los Angeles 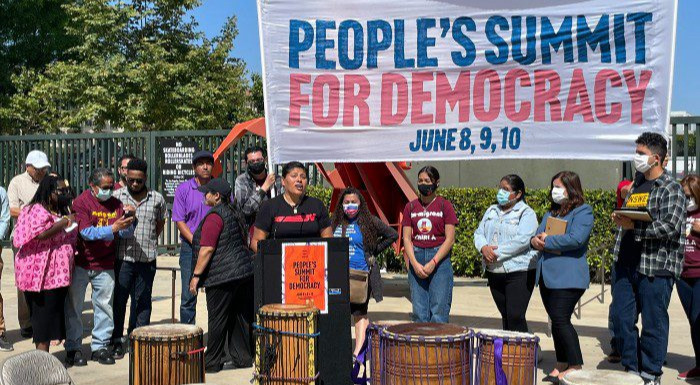 Los Angeles, June 9 (RHC)--The People's Summit for Democracy, which will last until tomorrow, Friday, got underway in Los Angeles.

During the summit, delegates from more than 200 social organizations, trade unions, and political groups will address the importance of sovereignty and the impact of U.S. intervention in Latin America.

The People's Summit will also deal with the humanitarian impact of Washington's interference on Latin American and Caribbean countries, the struggle for democracy, the rejection of the blockade against Cuba and gender equality.

Solidarity as a fundamental value in the resistance to the U.S. onslaught and the role of social movements in maintaining their cultural identity, the importance of food sovereignty and climate justice will also be discussed on this occasion.

In addition, the importance of respect for international law, notably the countries' sovereignty and self-determination, including the economic independence of peoples, are among the key topics being debated during the gathering.

The People's Summit takes place amid the IX Summit of the Americas, from which the U.S. government decided to exclude Cuba, Venezuela and Nicaragua under the accusation of not respecting the Democratic Charter of the Americas.

Several Latin American countries have rejected such an unjust move, including Mexico, Honduras, Argentina and Venezuela.

"This Summit failed even before it began," the executive director of the Bolivarian Alliance for the Peoples of Our America - Peoples' Trade Agreement (ALBA-TCP), Sacha Llorenti, recently said about Washington'd decision not to invite all the region's nations.