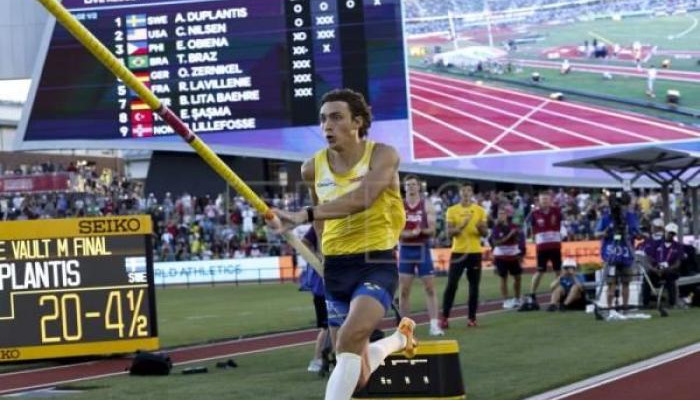 Eugene, July 25 (RHC) - The World Championships in Athletics in Eugene, Oregon, ended with two fantasy world records, where Cuba finished 29th in points and left without medals for the first time in its history.

One of the two record-breaking farewells was almost expected because Sweden's Armand Duplantis has accustomed his followers to fly higher and higher every day.

Four months ago, Mondo Duplantis had clocked 6.19 at the World Indoor Championships, and on Sunday he went two centimeters higher outdoors in Eugene (6.21).

For the 22-year-old Swedish phenom, it was his fifth world record.

Shortly before Duplantis' feat, Nigeria's Tobi Amusan stunned in the 100m hurdles semifinals with an incredible time of 12.12 seconds that erased USA's Keni Harrison's 12.20 from the books in 2016.

In the final Amusan amazed even more by stamping 12.06, but unfortunately it could not be homologated due to a headwind of 2.5 meters per second (the allowed is 2.00).

Amusan's best result so far was a fourth place in Tokyo 2020.

The 4x400 relays of both sexes shared the last medals of the event, and beyond the confirmed dominance of the Americans, the fact that Allyson Felix reached her 20th medal in world championships stood out.

She did it even without having to run in the final, she was used in the semifinal and that is why she also won the gold medal.

The U.S. athletes, who closed with the phenomenal Sydney McLaughlin, clocked 3.17.79, the leading mark of the year. MacLauhlin, who set another fantastic world record in the 400m hurdles with 50.68 seconds, clocked a flying time in the closing relay of 47.91 seconds, one of the best in history.

Other highlights included Jamaica's Shelly Ann Frasser, the first woman to win five world titles in the 100 meters, and Sherika Jackson, winner of one gold and two silvers in the sprint.

The host United States reigned supreme in the medal standings, with 13 titles, nine silver medals and 11 bronze medals, followed by Ethiopia (4-4-2) and Jamaica (2-7-1).

Cuba finished in 29th place by points, with 15 units, thanks to two fourth places (Leyanis Pérez and Maykel Masso), a sixth (Zayas) and a seventh (Yaimé Pérez).