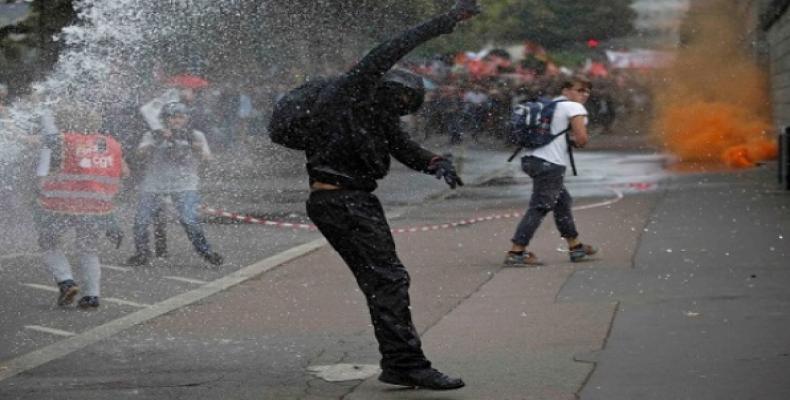 Paris, September 16 (RHC)-- Tens of thousands of demonstrators took to the streets across France Thursday and were met by riot police as the tarde unions organized one last protest against the government’s controversial labor law passed through decree, and without a parliamentary vote in July, before the fights shifts to the courts.

Jean Brunacci, member of the group Support to the Evicted in the Streets, from the western city of Nantes, said: "We are also striking, and we're in the streets to oppose the authoritarian shift of the government which is playing God, and not only putting democracy in danger but also and above all is leaving the way wide open for the far right."   The law allows employers to hire and fire people more easily, reduce pay, extend the length of the work week, and erode workers' collective bargaining rights.

Riot police were deployed in large numbers, despite the numbers being lower than the hundreds of thousands that turned out in June, and they fired tear gas and dispersed them with water hoses.  Videos posted online show demonstrators being violently dispersed, some of them with bloodied face, and an undetermined number of protesters arrested.

"The unions are back in the streets again after the summer to call for the repeal of this labour law which we strongly opposed throughout the spring, before the summer.  Today we are continuing the fight because we believe this law is illegitimate and illegal so we are calling for it to be repealed," the General Secretary of the CGT union in Nantes, Fabrice David, told Reuters.

The government of President Francois Hollande has said the measures are aimed at boosting the country’s economy and curbing the two-digit unemployment rate.  But opponents, and unions in particular, believe the reforms are a gift to employers.  France will vote in presidential and parliamentary elections in 8 months.