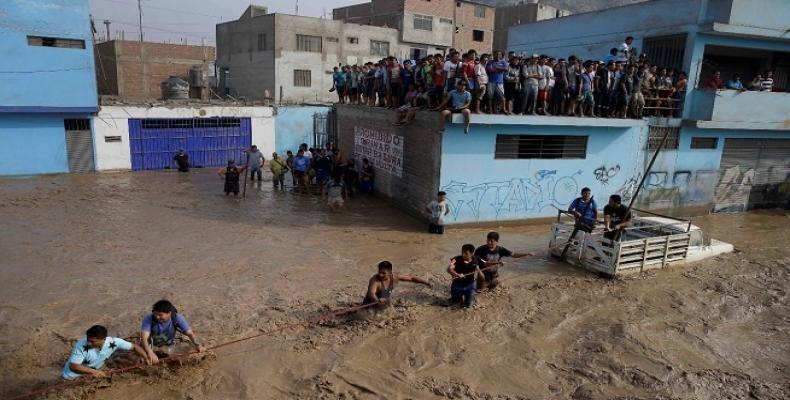 Lima, March 22 (RHC-Agencies) -- The death toll in Peru due to the El Nino phenomenon battering the country has risen to 78, the National Emergency Operations Center said on Tuesday.

A number of rivers continued to be placed in a state of yellow or red alert as they rose or remained at a high level.

Reconstruction work has begun on roadways, with over 1,100 kilometers of roads destroyed. About 33 highways remained closed, blocked or only partially opened, while over 160 bridges have collapsed.

Humanitarian aid has begun to flow into the country, with over 50 tons of aid received from Colombia, Chile and Ecuador.

The situation is looking up in terms of the supply of drinking water. While cuts and restrictions remained in certain areas, Lima has seen its supply virtually restored after more than five days of rolling cuts.

El Nino phenomenon has heated surface temperatures in the Pacific Ocean to 29 degrees, causing large-scale evaporation with the water then falling in torrential downpours and provoking massive landslides.