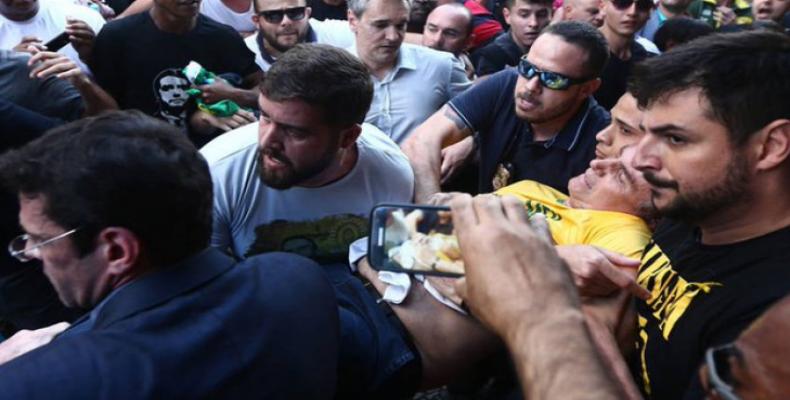 Brasilia, September 6 (RHC)-- Brazilian far-right candidate Jair Bolsonaro was stabbed in the abdomen while campaigning on Thursday, and Globo TV reported he was taken to a hospital in Juiz de For a for surgery.

Police in Minas Gerais state, where Bolsonaro was attacked, said they detained a man at the scene. Police did not identify the suspect.

Bolsonaro screamed in pain, then fell backward into the arms of those around him. It took a few moments for the crowd to realize what occurred, but they quickly rushed the candidate out of the street.

So far the reasons for the aggression against Bolsonaro, a candidate who in his campaign has encouraged violence and the possession and use of firearms, are unknown.

In a recent campaign rally, he threatened to shoot all supporters of the Workers' Party (PT). Jair Bolsonaro, of the Social Liberal Party (PSL), was included in all the polls about the intention to vote made until the end of August as second in the preference of the electorate, always behind former president Luiz Inácio Lula da Silva, the best placed contestant despite being locked up in Curitiba as a political prisoner for the last 153 days.

Fernando Haddad, who will likely be the Workers Party presidential candidate, said the stabbing was a “shame” and a “horror.” Leftist rival Ciro Gomes took to Twitter to express outrage at the political violence.