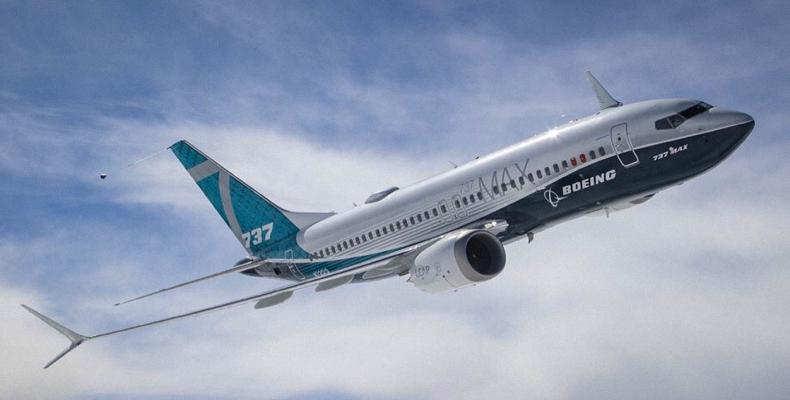 New York, October 19 (RHC)-- The U.S. Federal Aviation Agency, the FAA, says that Boeing withheld “concerning” messages from 2016 between employees about a flight-control system implicated in two crashes of the 737 Max, deepening the manufacturer’s crisis over the jets that have been grounded worldwide since March.

A Boeing test pilot complained in one of the messages that a flight control system, known as MCAS, was difficult to control, according to the messages, obtained by NBC News.  That system is at the heart of investigations into two fatal crashes. Investigators have implicated the system in both crashes — a Lion Air 737 Max that went down in Indonesia in October 2018 and an Ethiopian Airlines plane of the same model that crashed in March.

“It’s running rampant in the sim on me,” the pilot, Mark Forkner, Boeing’s former chief technical pilot, said in 2016 to a colleague, referring to the simulator, according to the transcript.  His colleague replied that they would have to update the description of the system.  “So I basically lied to regulators (unknowingly),” read Forkner’s reply.  Forkner did not immediately respond to a request for comment.

That system malfunctioned on both crashed flights, repeatedly pushing the planes’ noses down until their final, fatal dives.  All 346 people on both flights were killed.

Pilots at airlines, including American, complained after the crashes that they did not know about the system, known as MCAS, until after the first crash.  Boeing shares fell sharply after the news, reported earlier by Reuters. Boeing’s stock fell more 5% in afternoon trading to an eight-week low of $347.96.  The move shaved more than 130 points off the Dow Jones Industrial Average.   The messages add to pressure already piling up on Boeing and CEO Dennis Muilenburg.  The company and the FAA are facing several investigations into the plane’s design and software.

The company’s board removed Muilenburg as chairman last week, saying the division of the two roles will help him focus on bringing the plane back to service.  Muilenburg is set to testify in front of Congress later this month for the first time since the crashes in two hearings: a Senate commerce committee hearing on October 29th and a House transportation committee panel scheduled for October 30th.

The FAA said Boeing discovered the messages “some months ago.”  The FAA, which first certified the planes in 2017, said it is “disappointed that Boeing did not bring this document to our attention immediately upon its discovery,” the agency said, adding that it is “reviewing this information to determine what action is appropriate.”

Airlines have missed out on hundreds of millions of dollars in revenue because of canceled flights and the prolonged grounding has forced them to cancel thousands of flights.

Pilots at Southwest, the largest Max customer in the U.S., earlier this month sued Boeing for allegedly rushing the plane to market and said the grounding has meant its pilots have lost out on about $100 million in pay.

“The FAA’s announcement echoes the very serious concerns at the center of SWAPA’s lawsuit, and this is more evidence that Boeing misled pilots, government regulators and other aviation experts about the safety of the 737 MAX,” Southwest pilots’ union said in a statement.  “It is clear that the company’s negligence and fraud put the flying public at risk.”