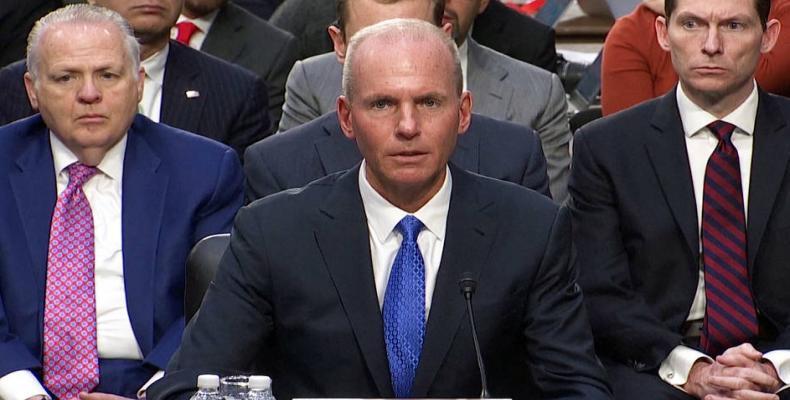 Washington, October 31 (RHC)-- Boeing CEO Dennis Muilenburg was grilled by U.S. Senate lawmakers over Boeing’s defective 737 MAX airplane, which was grounded worldwide after two crashes in Ethiopia and Indonesia that killed all 346 people on board.

Illinois Democratic Senator Tammy Duckworth said: “Boeing has not told the whole truth to this committee and to the families and to the people looking at this.  Yes, the pilots did exactly what they were supposed to do.  But five seconds later, especially if that sensor is still stuck, it overrides what the pilot does and it pushes the nose right back down again.  Three seconds.  A pilot’s best friend is time and altitude.  And on takeoff, there is no altitude and he’s got no time.”

During Tuesday’s hearing, Muilenburg admitted Boeing failed to provide pilots with additional key safety system information.  While he spoke, family members of the Boeing crash victims held up giant photos of their dead loved ones.  The House Transportation and Infrastructure Committee is also questioning Muilenburg.  And the U.S. Justice Department is conducting a criminal investigation against Boeing.