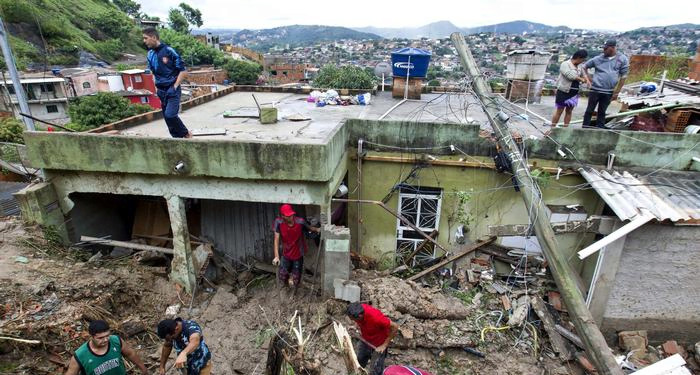 Sirens warned neighborhoods in the hillside tourist town to leave, with residents still shocked from the rivers of mud that buried homes and swept away cars and trees. At least two streets were already closed after landslides containing "rocky blocks."

Text messages warned residents to take refuge at relatives' homes or in public shelters "due to the volume of rain affecting the city, which will continue, with an intensity between moderate to strong, in the next few hours," the local Civil Defense said.

Amid fears that the toll could climb, firefighters and volunteers scrambled through the remains of houses Thursday -- many of them impoverished slums.  "Unfortunately, it is going to be difficult to find survivors," Luciano Goncalves, a 26-year-old volunteer, told AFP, completely covered in mud.

So far, 850 displaced people have been relocated to makeshift shelters, the vast majority of them in public schools.  The rains were the latest in a series of deadly storms -- which experts say are made worse by climate change -- to hit Brazil in the past three months.

Governor Claudio Castro of Rio de Janeiro state said the streets of Petropolis resembled "a scene from a war," adding these were the heaviest rains to hit the region since 1932.  The effects of uncontrolled urban expansion, said meteorologist Estael Sias, hit the poor hardest when disaster strikes.

Petropolis -- the 19th-century summer capital of the Brazilian empire -- is a popular destination for tourists fleeing the heat of Rio.

President Jair Bolsonaro, on an official trip to Russia and Hungary, will travel to Petropolis on his return Friday to inspect the damage, the government announced.

Because a warmer atmosphere holds more water, global warming increases the risk and intensity of flooding from extreme rainfall.  There have also been heavy rains in the northeastern state of Bahia, where 24 people died in December.