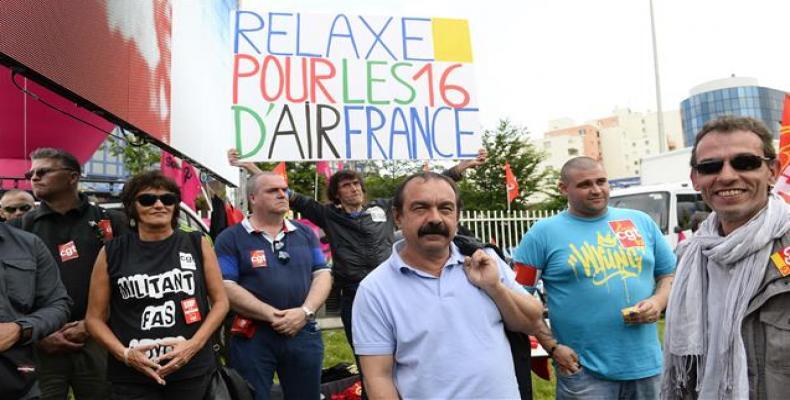 Paris, June 17 (RHC)-- The head of a major French union has vowed more street marches against a set of controversial labor reforms next week in defiance of threats by President Francois Hollande and his premier to ban anti-Paris protest rallies.

Philippe Martinez, leader of the General Confederation of Labor (CGT) union, which has been organizing demonstrations across France, accused the Hollande government of attempting to discredit legitimate protest.

Martinez said that the scenes of violence during weeks-long protests in the country involved people defending themselves against a police charge aimed at the peaceful demonstrators.

Elsewhere in his remarks, Martinez noted that attempts by Prime Minister Manuel Valls to blame CGT for violence could exacerbate tensions.  The union’s leaders have called for fresh anti-reforms protests on June 23 and June 28.

The remarks came after Hollande and his premier told CGT that it would be denied permission for further street rallies unless the union provided better security guarantees.

France’s embattled government says the proposed labor reforms focus on maximum working hours, holidays and breaks, and are aimed at curbing the unemployment rate.  Protesters and trade unions, however, say the government wants to make it easier and less costly for employers to lay off workers.

The draft labor bill was recently forced through the lower house of parliament, but it must be debated in the Senate for final approval.