Venezuela: “Sooner or later, the Cuban people will have to be compensated for the pain inflicted on them by the US brutal blockade&quot; 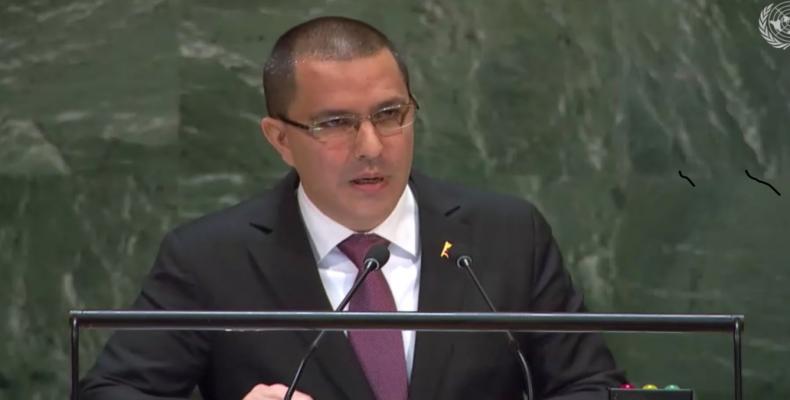 United Nations, November 7 (RHC)-- No obstacle will impede Cuba and Venezuela from continuing their path towards development, said Venezuelan Foreign Minister Jorge Arreaza when addressing the United Nations General Assembly as the body got ready on Thursday to vote on a  resolution demanding the lifting of the US blockade on Cuba.

Venezuela’s top diplomat said that his high-level delegation to the debate on the resolution was an illustration of the priority his government attributes to the defense of the Caribbean island.

Arreaza said that the current US escalation against Havana is imperial arrogance vis-a-vis the dignity and courage of the heroic Cuban people for their decision to govern their future and to struggle for their own well being and happiness.

He added that the consecutive virtually universal appeal in support for the Resolution shows the commitment by UN Member to the provisions in the Charter, including the principles of sovereign equality and the political independence of states.

However, Arreaza noted how the appeal has been disregarded and treated with contempt by those whose actions systematically violate the Charter and international law with impunity.

The Venezuelan Foreign Minister called for a halt to economic and financial terrorism, and a halt to the non-conventional war with such lethal consequences for the people of Cuba and now the people of Venezuela.

“Political intolerance is not the way to handle international relations. Only governmental elites that are not civilized would use economic suffocation as a weapon of mass destruction to impose their political preferences on sovereign countries and to impose sufferings on the peoples. It is virtually a criminal practice and a crime against humanity,” said Arreaza.

The diplomat said that the US blockade on Cuba amounts to collective punishment because of the whims, caprices, and arrogance of those who believe they are superiors to others, and who think they're masters of the world, but he noted that Cuba has shown that they are wrong.

“Sooner or later, the Cuban people will have to be compensated for the pain inflicted on them by this brutal and arbitrary policy,” stressed the Venezuelan Foreign Ministers.

In concluding his remarks, Arreaza appealed to members of the international community to vote for the resolution.