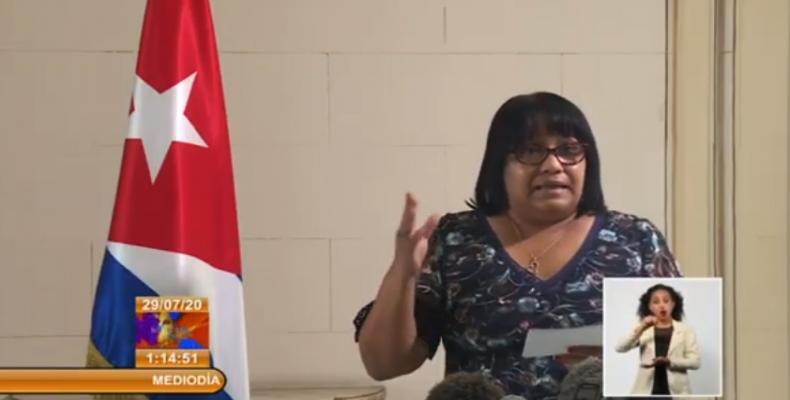 Havana, July 29 (RHC)—The Cuban Foreign Ministry announced Tuesday the postponement of the debate and vote of the draft resolution "Necessity of ending the economic, commercial and financial embargo imposed by the United States of America against Cuba" to May 2021 during the resumed session of the 75th session of the United Nations General Assembly.

Good morning to you all,

The complicated epidemiological situation resulting from the COVID-19 pandemic at the global level and in particular in the United States, including New York City, will lead to changes in the ordinary course of the work of the United Nations General Assembly at its 75th session, which is due to begin next September.

This will have an impact on the debate and the vote on the resolution submitted by our country to the plenary session of the UNGA, which year after year has been supported by the international community, which almost unanimously calls for the lifting of the economic, commercial and financial blockade by the United States against Cuba.

This resolution is traditionally presented and adopted by the UN General Assembly in the fall, however, the pandemic situation in the United States and New York City cannot be predicted at this time. Instead, forecasts indicate that there will be an upsurge in the disease, so epidemiological health measures will continue to be implemented at UN headquarters, which, among other issues, will limit the presence of delegations to a minimum at its facilities.

Taking into account these elements and,  to guarantee the good development of the debate and the vote, whose positive results are followed with much attention by the Cuban people and the international community,  it has been decided to transfer the consideration of the draft resolution entitled "Necessity of ending the economic, commercial and financial blockade imposed by the United States of America against Cuba" from the traditional date of late October and early November to May 2021 during the session of the 70th session of the UNGA itself, when we hope there will be an improvement in the epidemiological situation in New York City, the headquarters of the organization.

I want to emphasize that the debate and the vote on the draft resolution submitted by Cuba every year are taking place during the same 75th session of the General Assembly itself and that it is only being changed to its resumed segment in the spring of 2021.

This decision responds only to the epidemiological consequences generated by the COVID-19 pandemic and its direct and practical impact on the work at the UN headquarters.

We reaffirm that while the economic, commercial, and financial blockade by the United States persists, which instead of being lifted, as the international community claims, it has been intensified, even in these times of pandemic, Cuba will not fail to denounce this policy in all possible scenarios.

For the twenty-ninth consecutive time, Cuba will submit to the United Nations General Assembly at its 75th session in May 2021 a draft resolution calling for the end of the blockade, for which we trust in the sustained support of the international community.