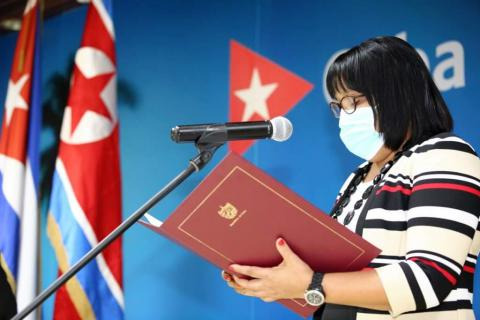 Havana, October 8 (RHC)-- A postage stamp cancellation ceremony on the occasion of the 60th anniversary of establishing diplomatic relations between the Democratic People's Republic of Korea and the Republic of Cuba took place Thursday at the Cuban Foreign Ministry.

During the event, the Vice Foreign Minister, Anayansi Rodríguez Camejo highlighted the historical links of sisterhood and solidarity between both peoples, parties, and governments, forged by the historic leaders Kim Il Sung and Fidel Castro Ruz and developed by the top leaders of both countries, as well as the potential for closer bilateral cooperation, despite the blockade and economic sanctions imposed by the United States against both nations. Rodriguez Camejo added that Cuba had maintained a policy of supporting the sister Democratic People's Republic of Korea in its efforts to build a prosperous socialist nation, to achieve lasting peace, reconciliation, and stability on the Korean peninsula.

She also reiterated Havana's strong condemnation of unilateral and unjust sanctions against the DPRK and foreign interference in Korean affairs.

The Cuban diplomat also expressed deep appreciation for the DPRK's continued support in the island's struggle for the lifting of the unjust economic, trade, and financial blockade imposed by the United States against Cuba.

For his part, Ambassador Ma Chol Su ratified the North Korean authorities' willingness to continue strengthening relations in various areas of common interest and recalled the close ties of friendship between the two socialist countries.