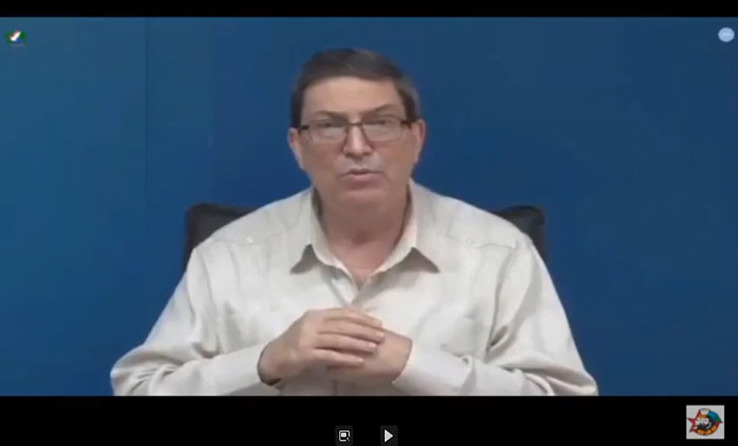 Speaking on Thursday during the closing of the International Virtual Meeting Ideas that are Banners, the head of Cuban diplomacy denounced what he called the new imperialist distribution of the world among global platforms that own the digital networks to dominate personal data, manipulate information, generate conflicts for political interests, and promote hatred and division.

He explained how the pandemic generated by Covid-19 accelerated digitalization and referred to the current asymmetry in the Latin American region in terms of the small production of contents and the high presence of internet users.

He also warned about the United States financing scientific laboratories aimed at managing social fragmentation in the countries.

In this regard, he urged to generate a communication strategy with rigor, fight simultaneously on the streets, squares, and networks, and mobilize with conviction in physical and digital areas.

It is urgent to fight for the States to exercise their sovereignty in cyberspace and the true democratization of the networks," said the Foreign Minister.

According to Rodríguez, the peoples and youths need to create and articulate relations with political forces, social movements, left and progressive organizations, and governments, to dispute power to the right.

He also called for sharing practices and experiences of resistance, as well as tools for political battle.

Young people have historically led changes in favor of progress. It is up to you to deal with the phenomenon to achieve balance in the world," he emphasized.

In his speech, the Minister of Foreign Affairs, highlighted the extraordinary contribution of the Cuban Revolution's historical leader, Fidel Castro, in favor of liberation and against imperialism, capitalism, and war.

"To honor Fidel Castro is to study his emancipatory thought, transform action, and to turn his legacy into facts in the face of pressing challenges of humanity," he remarked.

Participants in the meeting,  organized by the Young Communist League of Cuba since Monday, analyzed proposals given the present challenges and defended solidarity, anti-imperialism, and anti-neoliberalism.

The Venezuelan President, Nicolás Maduro, also participated in the virtual closing, who emphasized the new generations' role in the profound changes of the societies and assured: 'A better world is possible, necessary and we are going to achieve it.'