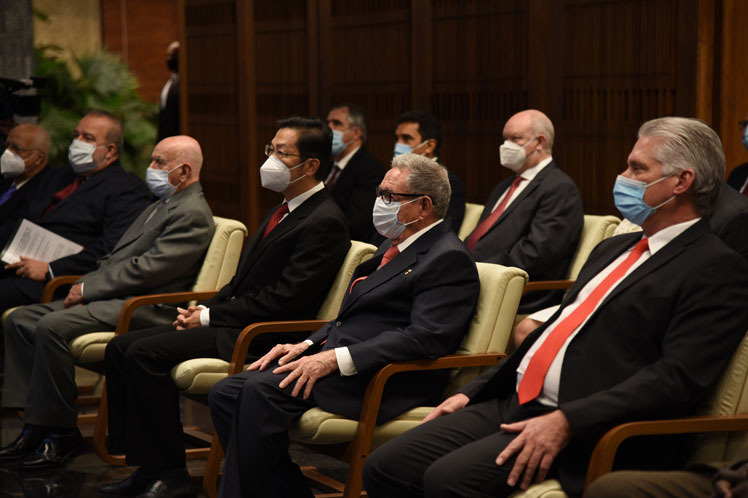 Havana, December 8 (RHC)— Cuba and China reaffirmed on Monday their wish to deepen their bilateral relations during a ceremony held on the occasion of the 60th anniversary of the establishment of diplomatic ties.

The Communist Party leader, Army General Raúl Castro; President Miguel Díaz-Canel; members of the Party's Political Bureau, the State, and Ministerial Councils, as well as representatives of mass organizations, participated at the political-cultural event held at the Revolution Palace in Havana.

was the first country in Latin America and the Caribbean to establish diplomatic relations with the Asian nation and that it contributed in its links with the rest of the region.

He pointed out that the Caribbean island rejects hegemony, blockades, and policies of force, and ratified the will to "continue enriching the common history of relations".

The Chine ambassador to Cuba, Chen Xi, conveyed a greeting to Raúl Castro, Miguel Díaz-Canel and other party and government leaders from Chinese President Xi Jinping.

He said that both countries, in a complex international scenario, keep the flag of socialism high and safeguard peace and independence.

He rejected the economic, commercial and financial blockade imposed by the United States on the island and called for dialogue, multilateralism and solidarity.

Chen Xi emphasized the high-level political interaction between the two nations, mutual political trust and assured that the 60th anniversary is a new starting point for strengthening cooperation for the benefit of the people.