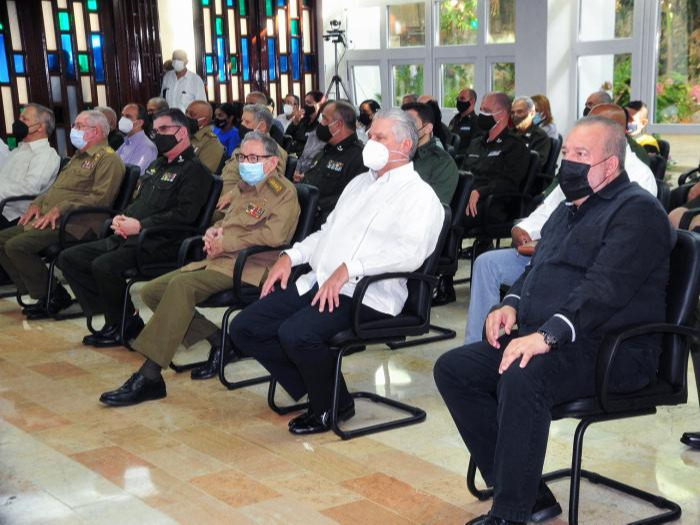 Havana, June 6 (RHC)--A few hours before the 60th anniversary of the Ministry of the Interior (MININT), Army General Raúl Castro Ruz and the First Secretary of the Communist Party, Miguel Díaz-Canel Bermúdez, led the ceremony on Saturday commemorating the official constitution of that institution, on June 6, 1961.

In a letter to all its troops and read by Minister Major General Lázaro Álvarez Casas, Army General Raul Castro described the MININT as  "an indispensable bulwark of the Cuban Revolution."

Raul congratulated the men and women "who from the most dissimilar, sensitive, risky or challenging trenches, inside and outside Cuba, have consecrated their lives following Marti and Fidel's principle that Homeland is humanity."

In his letter, he acknowledged the many generations of fighters and workers, born from peasant and working families, also coming from the Rebel Army and the clandestine struggle, who have been part of the constant battle against crime and the enemies of the Revolution.

In the modest ceremony - which took place at MININT headquarters in Havana, President Díaz-Canel said the first remembrance on the anniversary was for those who had fallen in the line of duty.

The President ratified the eternal commitment to be at the height of those young people who, with little knowledge but full of will and patriotism, devoted their lives to the birth of this institution. 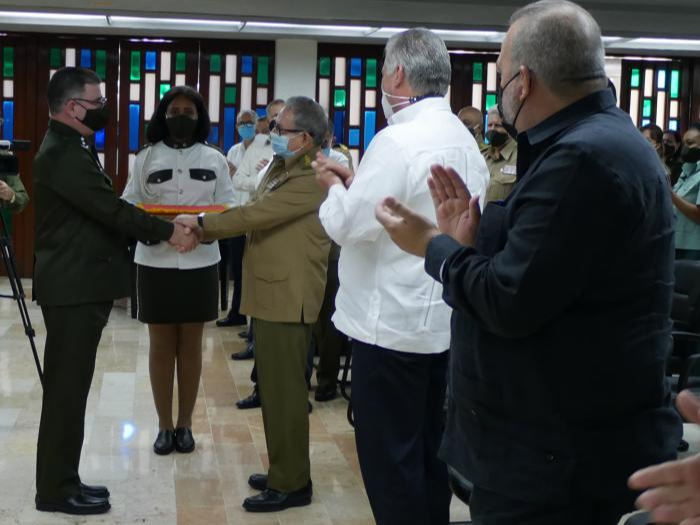 The Cuban Revolution, its resistance and triumphs, its combats and victories --affirmed Diaz-Canel--, would not exist without the Ministry of the Interior.

He also referred to the new and challenging combats that MININTtroops currently undertake in facing the United States government's hostile policies.

It supports the counterrevolution, the ultra-right of Cuban origin settled in South Florida - "who despair implementing plan after plan, more and more subversive, in the absurd understanding that it is now or never against sovereign Cuba".

The President asserted that MININT's combatants are the target of attacks, mockery, discredit, and lying manipulations as so many times throughout revolutionary history.

"Those constructions, amplified in today's vast media scenarios, have the deliberate purpose of breaking the sacred unity, the close and historic bond that unites the people with their armed institutions."

As proof of that indestructible union, the Head of State spoke of the confrontation with the COVID-19 epidemic, a new battle for life waged by the combatants and civilian workers of the MININT as part of the Cuban people.

Díaz-Canel affirmed that amid the current circumstances and to rigorously comply with the agreements the 8th Party Congress, "MININT is called upon to reinforce actions to confront crime in all its manifestations resolutely."

In the fight against illegalities and social indisciplines that break so much, he added that it is essential to articulate all the responsible institutions' work so that legality prevails.

At the ceremony, the Army General handed over to the Minister of the Interior the MININT Commemorative 60th Anniversary Medal, which is being awarded to thousands of combatants of that organization with 15 or more years of service, to retirees, and to civilian workers who exceed 25 years of dedication to the institution.