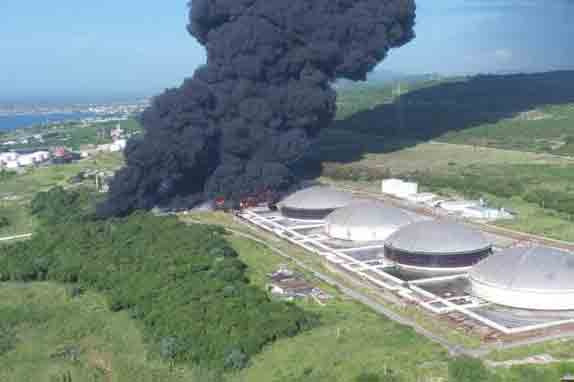 Matanzas, Cuba, August 7 (RHC)-- The fire in the first fuel tank that caught fire on Friday in the industrial zone of Matanzas was put out Sunday, local authorities announced.

It was in that storage tank where lightning struck on the afternoon of August 5 and triggered a large fire that reached another tank. Firefighters and other units from Cuba, Mexico, and Venezuela are working to bring it under control.

Cooling actions are concentrated there to prevent the fire from spreading to the rest of the fuel tanks that make up one of the batteries of the Supertanker Base located in Matanzas Bay.

In that base, fuel evacuation using fuel tanks and a tanker that docked this morning in Matanzas bay continues.

President Miguel Dïaz-Canel is leading the efforts to contain the fire, which has raised a huge cloud of smoke and flames since Friday.

A hundred people were injured, although most have already been released from the hospital.

A member of the province of Cienfuegos fire department, who lost his life during the difficult situation, was buried on Sunday.