Hurricane Ian passes over the city of Pinar del Río 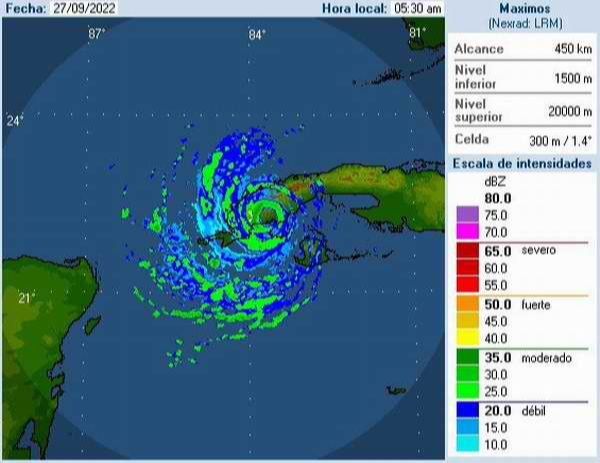 The center of hurricane Ian made landfall around 4:30 am, by Coloma in the south of Pinar del Rio. Photo: Radio Rebelde

Havana, September 27 (RHC)-- The center of Hurricane Ian made landfall around 4:30 am, by Coloma in the south of the western province of Pinar del Rio, with maximum sustained winds of 205 kilometers per hour.

However, associated with the transit of the eye over the province, there was a calm that lasted 48 minutes. Its minimum central pressure has dropped to 952 hPa and it is moving north at 19 kilometers per hour.

Ian's center was estimated at 6:00 a.m. at 22.4 degrees north latitude and 83.7 degrees west longitude, a position that places it about 25 kilometers south of Viñales and 40 kilometers south of Puerto Esperanza, a possible point of exit to the sea along the north coast of Pinar del Río.

In the last 24 hours, heavy and intense rains associated with the spiral bands of Hurricane Ian have been reported, with 108.3 mm being the most significant accumulated rainfall reported at the Amistad Cuba-France weather station, followed by 98.3 mm at Punta del Este, both in the special municipality of Isla de la Juventud.

The strongest gust was 208 kilometers per hour in San Juan and Martinez (Pinar del Rio). In the next 6 to 12 hours, Hurricane Ian will maintain a similar course and speed of translation, moving over the northern half of the province of Pinar del Río during the next two hours, until leaving a point on the north coast near Puerto Esperanza (Viñales), at approximately 08:00 am.

In the radar and meteorological satellite images, areas of showers, rains and strong electrical activity are observed crossing over Pinar del Río, Artemisa, Mayabeque and Matanzas, a situation that will persist during the morning and early afternoon, and severe manifestations may be reported.

Heavy coastal flooding remains on the coast of the Gulf of Guanahacabibes, north of the province of Pinar del Rio and moderate flooding in the south of the Isle of Youth and Pinar del Rio. On the southern coast of Artemisa and Mayabeque, they will become strong during the morning.