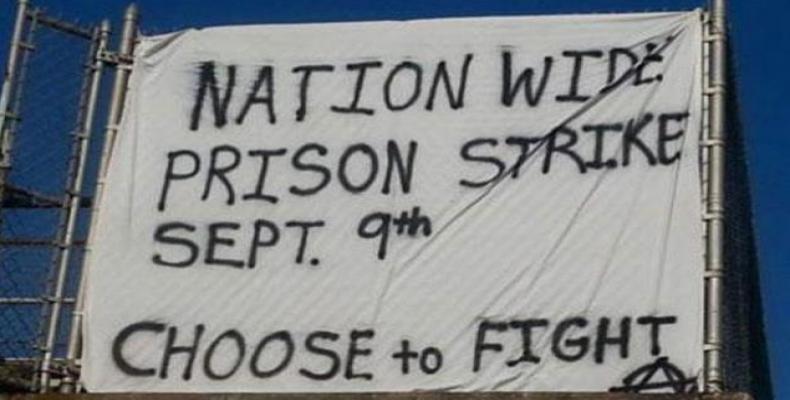 New York, September 10 (RHC)-- A nationwide prison strike over conditions and wages behind bars was under way in at least several correctional facilities across the US.

Prisoners in two dozen American states have gone on strike to protest living conditions and “modern-day slavery,” the biggest of its kind in U.S. history, according to prison rights advocates.

Inmates in prisons in as many as 24 states and 40 facilities are refusing to eat or go to work, the Incarcerated Workers Organizing Committee (IWOC) said Friday.   “Slavery is alive and well in the prison system, but by the end of this year, it won’t be anymore,” the IWOC wrote in a call to action.  “This is a call to end slavery in America.”

The strike comes on the 45th anniversary of the Attica prison riot, when inmates at a maximum security prison in Attica, New York, revolted and demanded better living conditions.

However activists say reforms demanded during the Attica uprising in 1971 still remain among the demands of the prisoners today.  “People are left in solitary confinement for years on end, which is torture, literally,” Brianna Peril, co-chair of the IWOC and former prisoner, told The Independent.

The United States has the highest rate of incarceration in the world, with about 2.3 million individuals behind bars.

According to the National Association for the Advancement of Colored People (NAACP), African Americans now constitute nearly one million of the total inmate population.  Figures by the NAACP show that Blacks are imprisoned at nearly six times the rate of whites.