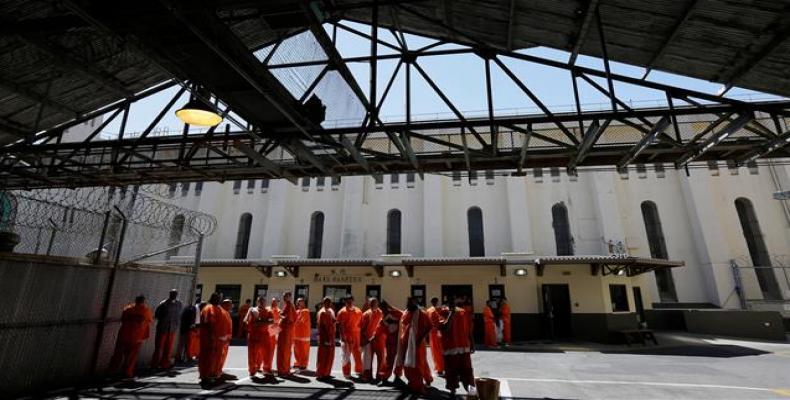 San Francisco, August 22 (RHC)-- Prisoners across the United States have started a protest where they are refusing to work, holding sit-ins and staging hunger strikes.  The United States has a massive army of 2.3 million incarcerated men and women which is by far the largest imprisoned population in the world.  The event possibly will be the largest prison strike in American history.

The two-week strike, which started on Tuesday, is designed to put pressure on the U.S. penal system.  The protest leaders say the protest is aimed at ending "modern-day slavery."  Prisoners complain they are paid pennies on the dollar per hour for labor.

The protest began on the anniversary of the assassination of jailed African American activist and political prisoner George Jackson, who was shot dead by a guard in 1971 after allegedly attempting to escape from San Quentin State Prison in California.

In the first part of the strike, stoves will remain unlit in kitchens, ready-meals unheated and thousands of breakfasts uncooked.  Then the laundry will be left unwashed, prison corridors un-cleaned, and the lawns on the external grounds will remain untrimmed.

The last day of the strike on September 9th is the date when in 1971 the Attica Prison riots in New York began.  The riots left more than 40 people dead when police stormed in to re-take the prison.

The strike is organized by Jailhouse Lawyers Speak, a network of imprisoned prisoner rights advocates based out of Lee Correctional Institution in South Carolina and backed by the Incarcerated Workers Organizing Committee (IWOC), a prisoner-led trade group.

“Prisoner participation depends on their location and privilege status,” said Amani Sawari, a prison reform activist and spokesperson for the event.  “If inmates are working they can suffocate the prison industrial complex by reducing their spending. In some detention facilities, prisoners may not be working so they might do a sit-in.  It all depends.”

“Initially a strike was planned for 2019, but the Lee prisoners wanted a now-response. We want to make sure that things like this don't happen in the future,” said Sawari.

The prisoners released a list of 10 demands that includes the immediate improvement of prison policies, and an increase in prisoner wages. The inmates also call for more rehabilitation services and voting rights.

Experts have said that there is a chance that the strike may force authorities to introduce some changes in prisons.

"If the strike is widespread enough, it could be effective," said Lea Johnson, Professor of Law at the University of Florida Levin College of Law. "These circumstances like poor labor conditions, poor prison conditions, unpaid labor, and lack of access to mental health treatment exist seemingly behind closed doors.  By going on a national strike, you pull back the curtain and it can force legislators to act."