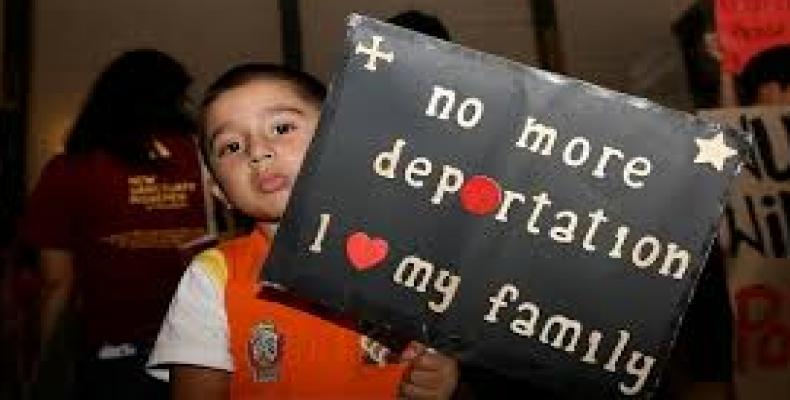 Washington, March 1 (RHC)-- Hundreds of faith groups in the United States across religious lines are rising to the occasion in the face of U.S. President Donald Trump's immigration policies, declaring their houses of worship safe havens for undocumented people who may be facing deportation and joining the movement of cities, college and university campuses, and restaurants that have pledged to protect undocumented immigrants.

As Trump ramps up his xenophobic, militaristic crackdown on immigrants, synagogues, churches, mosques and temples are offering their support to counter these hardline actions.  According to the latest reports, nearly 700 churches across the United States have stepped up to declare themselves places of asylum.

In Hamden, Connecticut, one of the oldest Jewish congregations in the state, the progressive Reform synagogue Mishkan Israel, has opened its doors to provide a safe space for neighboring Latino communities targeted by immigration authorities.

“After the elections and what the president had said, we were concerned, and we thought it was time to turn our attention to the immigrants living in our communities,” said Rabbi Herbert Brockman, the synagogue’s spiritual leader, as reported by The Forward. “We began to explore what it means to be a sanctuary congregation and how we can open our home to immigrants.”

With a history of hosting figures from Martin Luther King Jr. to a representative of the Palestine Liberation Organization, the synagogue has also housed refugees in the past, from a Muslim Bosnian family in the nineties, to an Iraqi family more recently.

According to Rabbi Jill Jacobs, executive director of the Jewish rabbinic social justice group T’ruah, between five and 10 synagogues nationwide have already voted to call themselves sanctuary congregations, while around another 20 are currently looking into it.  “It’s an affirmation that they are willing to house people at risk of deportation,” Jacobs said.

Meanwhile, in New York, church halls and other meeting spaces have been filled to the brim with faith groups holding meetings to discuss how best to respond to the immigration crackdown.  One church in the city providing sanctuary is that of Rev. Donna Schaper’s, an immigration advocate for the last decade.  "We are providing sanctuary of all kinds to hundreds of people, spiritual support, moral support, legal support, financial support, physical support if they need it," she told the CBC.

In the city of Detroit, Ryan Bates, executive director of Michigan United led a mixed-faith group in a workshop on how best to support undocumented immigrants.  Declaring a house of worship a sanctuary for immigrants in imminent danger should be done in the spirit of civil disobedience, Bates told the 50-member group.

While immigration raids and deportations existed on a massive scale under former U.S. President Barack Obama, earning the former POTUS the moniker “Deporter-in-Chief”, the increased media attention to Trump’s continuing policies and threats of even further expansion of the deportation machine have spurred more groups to take action.

But it's not the first time faith groups have organized to protect undocumented migrants and refugees.  The sanctuary movement in the U.S. — which has its roots in the 1980s when U.S.-backed civil wars and political turmoil consumed Guatemala, El Salvador, and Nicaragua — was initially led by hundreds of religious institutions across the country with a broader support network of some one thousand faith-based organizations that together provided shelter, material needs, legal support, and other basic services to migrants, in spite of the government's denial of their right to remain in the United States as refugees.