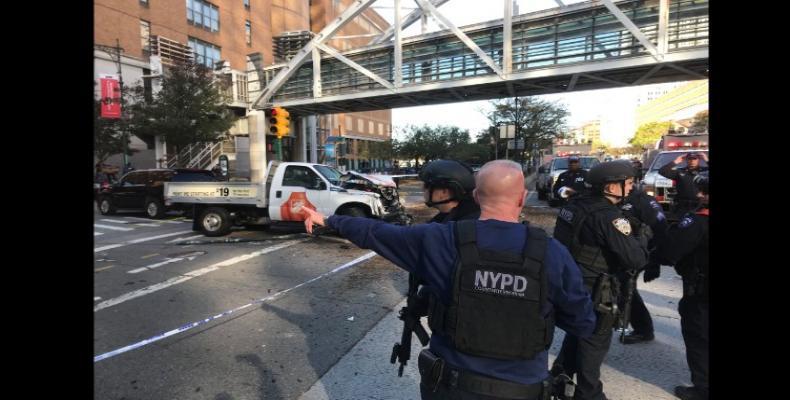 New York, November 1 (RHC)-- In New York City, eight people were killed and 11 more injured when a driver intentionally drove a pickup truck down a bike path along Manhattan’s Hudson River Tuesday.  Officials are calling it an act of terror.

Police say the attacker was 29-year-old Sayfullo Saipov.  He reportedly drove a rented truck down the bicycle lane, killing multiple people, before crashing into a school bus.  He then reportedly jumped out of the pickup, waving a pellet gun and a paintball gun.

Police say he yelled “God is Great” in Arabic before being shot by police in the stomach.  He survived the shooting.  Authorities say they uncovered handwritten notes in Arabic near the truck that suggest Saipov had declared allegiance to ISIS.

In response to the attack, President Trump tweeted: “In NYC, looks like another attack by a very sick and deranged person.  Law enforcement is following this closely.  NOT IN THE U.S.A.!”

Trump went on to tweet: “I have just ordered Homeland Security to step up our already Extreme Vetting Program. Being politically correct is fine, but not for this!” Among the victims of the attack were five Argentines who had gathered to celebrate the 30th anniversary of their high school graduation.