Four U.S. soldiers and 14 others killed in bomb attack in Syria’s northern city of Manbij 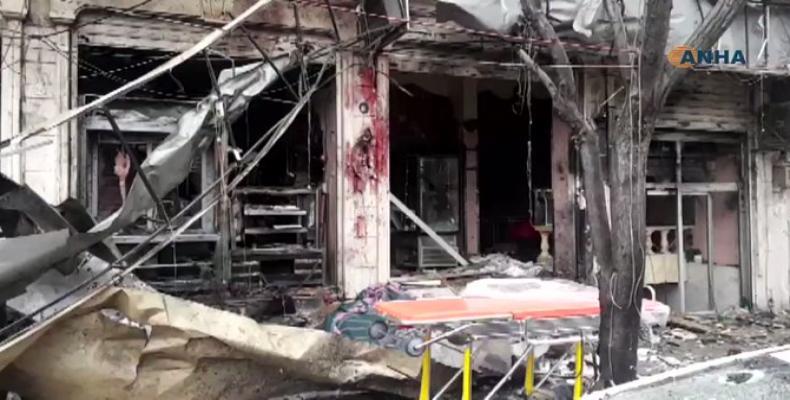 Damascus, January 17 (RHC)-- At least four U.S. soldiers and 14 others were killed in a massive bomb explosion near a patrol of the U.S.-led coalition purportedly fighting the Daesh Takfiri terrorist group in Syria’s flashpoint northern city of Manbij.

Reuters quoted an unnamed U.S. official as saying that three other American troops were also wounded in the Wednesday afternoon blast.

"U.S. service members were killed during an explosion while conducting a routine patrol in Syria today," the military headquarters responsible for operations in Iraq and Syria had earlier said in a statement.  "We are still gathering information and will share additional details at a later time."

The so-called Syrian Observatory for Human Rights (SOHR) identified nine of the fatalities as civilians, adding that the rest were members of the U.S.-backed Syrian Democratic Forces (SDF), which has Kurdish People's Protection Units (YPG).

The Britain-based monitor added that the blast targeted the al-Ummara restaurant in the center of Manbij on Wednesday afternoon.

The Observatory noted that the death toll is expected to rise as some of the wounded victims are in critical condition.

U.S. President Donald Trump "has been fully briefed and we will continue to monitor the ongoing situation in Syria," the White House said in a statement, in an apparent reference to the attack.

Daesh later claimed responsibility for the bomb attack, saying the attacker detonated his explosive-laden vest as U.S.-led coalition forces were passing by.

Manbij has been a major bone of contention between Turkey and the United States.  Ankara has complained over the slow implementation of a deal reached with Washington in June 2018, which would see the YPG ousted from the town and moved back to the eastern bank of the river.

Turkey considers the YPG a terrorist organization and an extension of the outlawed Kurdistan Workers’ Party (PKK), which has been fighting for an autonomous region inside Turkey since 1984.

Over the past few weeks, the Turkish military has been sending reinforcements to frontline areas with YPG militants in northern Syria.

Trump said last month that he was bringing home the American troops deployed in Syria -- some 2,000 -- claiming they had succeeded in their mission to defeat the Daesh Takfiri terrorist group.   His abrupt move sparked concern among officials in Washington, prompting Defense Secretary Jim Mattis to step down in protest.

On January 10th, Turkish Foreign Minister Mevlut Cavusoglu said his country would launch an offensive against YPG forces, in case the U.S. delayed the planned withdrawal of its troops from Syria.

"If the (pullout) is put off with ridiculous excuses like Turks are massacring Kurds, which do not reflect the reality, we will implement this decision,” Cavusoglu told Turkish-language NTV television news network in an exclusive interview.   The top Turkish diplomat then underlined that the Ankara government would go ahead with its incursion plan.  Cavusoglu said Ankara would fight the YPG whether or not US soldiers pulled out of Syria.

The Turkish military, with support from allied militants of the so-called Free Syrian Army, has launched two cross-border operations in northern Syria, dubbed “Euphrates Shield” and “Olive Branch”, against the YPG and Daesh Takfiri terrorists.