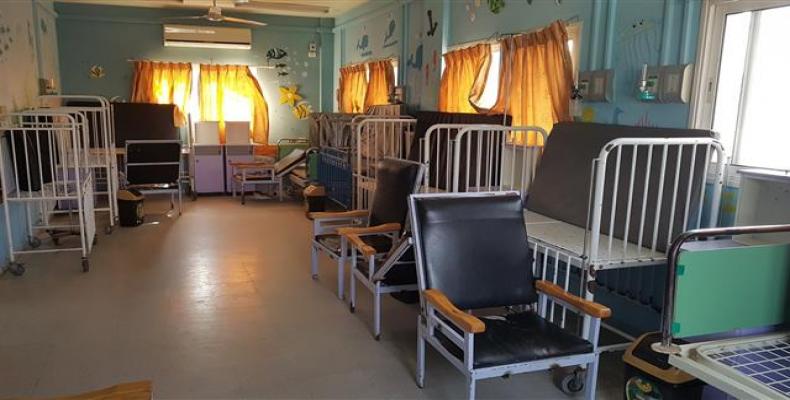 Gaza City, January 30 (RHC)-- A hospital in the besieged Gaza Strip has halted its services after it ran out of fuel for its electric generators, the health ministry says, as a dire power shortage continues to worsen the humanitarian situation in the Palestinian enclave.

According to Ashraf al-Qidre, a spokesperson for Gaza’s health ministry, lots of patients in the Beit Hanoun Hospital on Monday were transferred to other hospitals or medical centers that are still working despite persisting lack of fuel and electricity.  He added that the hospital, which is in a city with the same name on the northeast edge of the blockaded sliver, is the only health facility in the northern section of Gaza where pediatric and ear, nose and throat surgery is available.  Qidre further said that around 60,000 people are usually served by the hospital, which had been treating dozens of patients in critical condition.

Meanwhile, Beit Hanoun Hospital wrote in a statement posted on its official Facebook page that “All health services provided at Beit Hanoun hospital were suspended due to power cuts and the lack of fuel for the hospital’s backup generators.”  It also posted a number of photos showing empty beds, hallways, pediatric wards and operating rooms, warning that the chronic fuel shortage “threatens the lives of patients.”

At current electricity rates, the hospital needs 500 liters of fuel per day to operate a generator and keep services open, Qidre went on to say.

Early this month, people in Gaza took to the streets to protest the increasingly unlivable conditions in the enclave, as they are suffering from crippling energy shortages, with inhabitants receiving only a few hours of electricity each day.

Gaza’s only power plant was forced to shut down in early April last year after it remained without fuel. Three electricity lines set up by Egypt and reaching into Gaza are capable of providing 27 MGW of mains electric power per day but are rarely operational.  Payments for electricity have been a key issue in ongoing efforts at reconciliation between the Gaza-based Palestinian resistance movement Hamas and the West Bank-based Palestinian Authority (PA), led by President Mahmoud Abbas.

Last summer, the PA slashed its monthly payments for the power supplies to Gaza by 30 percent, prompting Israel to cut the electricity. The PA move was allegedly aimed at pressuring Hamas, which has denounced the power cuts as collective punishment.

The Gaza Strip, with a 1.85-million-strong population, has been under an Israeli siege since June 2007. The blockade has caused a decline in living standards as well as unprecedented unemployment and poverty there.  The UN says Israel will bring about “total collapse” in the besieged Gaza Strip by carrying out a plan to further slashing its mains electricity supplies to the sliver.

Israel has also launched several wars on the Palestinian sliver, the last of which began in early July 2014. The last Israeli military aggression, which ended on August 26, 2014, killed nearly 2,200 Palestinians. Over 11,100 others were also wounded in the war.