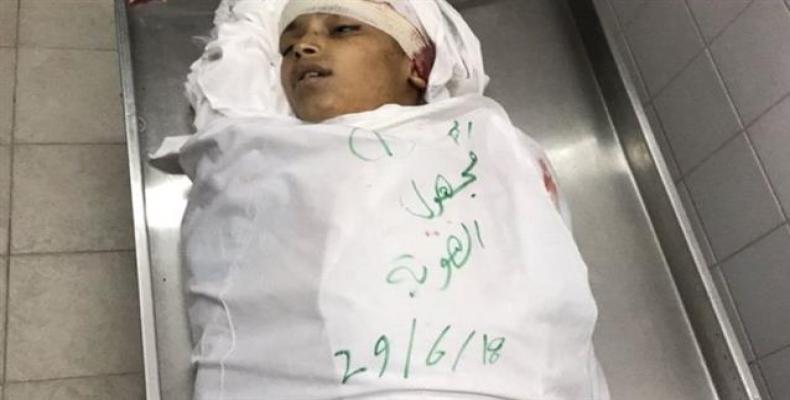 Gaza City, June 30 (RHC)-- Israeli fire has taken the lives of two more Palestinians, a 13-year-old boy and a 24-year-old man, across the Gaza Strip.  Gaza’s Health Ministry said the boy, identified as Musab Ayman Asfour, was shot in the head near the town of Khan Yunis alongside the eastern border of Gaza on Friday.

Protests along the Gaza fence since March 30 have led to clashes with Israeli forces, where at least 135 Palestinians, including 14 children, have been killed.  The Palestinian protesters demand their right to return to their homeland.  Over 15,000 Palestinians have also sustained injuries.

On May 14, Israeli troops opened fire on Palestinians who had gathered near the Gaza fence in protest against the inauguration of the U.S. embassy in Jerusalem.  Over 60 Palestinians were shot dead and more than 2,700 were wounded by Israeli snipers who had been positioned along the fence.

Every year on May 15, Palestinians all over the world hold demonstrations to commemorate the day which marks the anniversary of the forcible Israeli eviction of hundreds of thousands of Palestinians from their homeland in 1948.

The United Nations Children’s Fund (UNICEF) has said children in the Gaza Strip are the main victims of the Israeli atrocities, where some 1.8 million people are living under a crippling blockade.

Gaza has been under the Israeli siege since June 2007, causing a decline in living standards as well as unprecedented unemployment and poverty.

Israel has also launched several wars on the Palestinian territory, the last of which began in early July 2014 and ended in late August the same year.  The Israeli military aggression killed nearly 2,200 Palestinians and injured over 11,100 others.