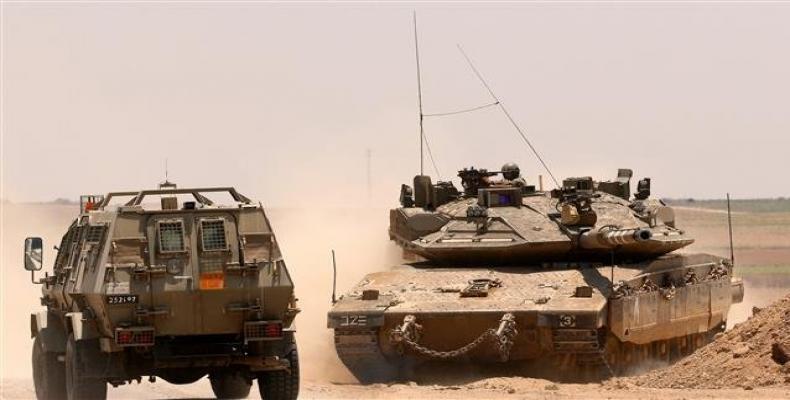 Gaza City, October 19 (RHC)-- The Israeli military has ramped up its armored forces around the Gaza Strip in order to curb weekly protests along a fence separating occupied territories from the besieged Palestinian enclave.

Media reports said some 60 tanks and armored personnel carriers were being deployed along the Gaza fence in anticipation of new demonstrations in the coming days.

Witnesses said that the reinforcements were clearly visible from main Israeli roads near the Gaza Strip.  The latest deployment is considered as the largest seen there since the 2014 Israeli offensive on the coastal sliver of land, which left more than 2,200 Palestinians dead.

The decision was taken after Israeli Prime Minister Benjamin Netanyahu convened his cabinet meeting earlier this week and pledged to take "very strong action" if Palestinian "attacks" continued.  The remarks came after the Israeli army said that a rocket fired from Gaza had hit the city of Beersheba in the Negev Desert and a second had landed in the sea.

A medical official told Israel Radio that three people were taken to hospital with injuries after the alleged rocket attacks.   Palestinian resistance groups, however, denied any involvement in the alleged rocket fire in a joint statement.

The groups also vowed to continue Gaza protests until the Israeli siege on the Palestinian region is terminated.  They also expressed their full preparedness to confront any Israeli aggression against Palestinians.

In Gaza, a Palestinian official told Reuters that resistance groups were not seeking war with Israel.  "The situation is delicate.  No one wants a war," the official said, adding: "Palestinian factions are demanding an end to the Israeli blockade that strangled life and business in Gaza."

The Tel Aviv regime carries out regular attacks on the blockaded coastal enclave under the pretext of hitting positions belonging to Hamas, the movement which runs the Palestinian territory.

The Gaza Strip has been under a crippling Israeli siege since 2007 and witnessed three wars since 2008. It has also witnessed a fresh wave of tensions since March 30, which marked the start of “The Great March of Return” protests.

More than 200 Palestinians have been killed and some 21,500 others wounded in renewed Gaza clashes, according to the latest figures released by the Gaza Health Ministry.