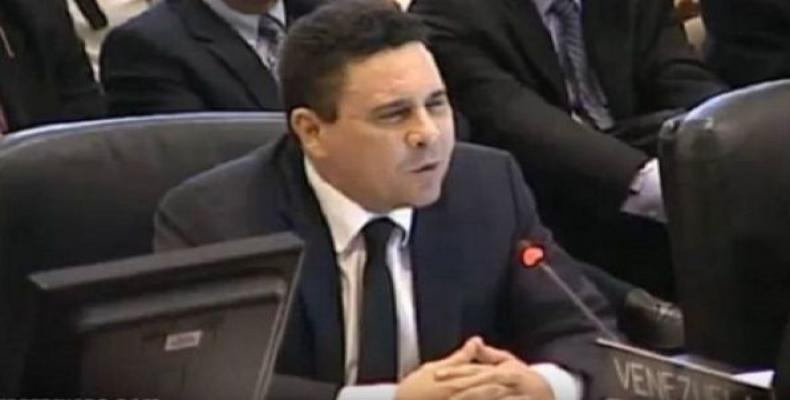 Washington, May 2 (RHC)-- The Venezuelan ambassador to the Organization of American States, Samuel Moncada, says the United States is using the organization to continually isolate and attack his country.  During the OAS session in Washington, D.C. to discuss Venezuela, Moncada defended his government, saying that the United States attacks the South American country by "coercing" other governments and the international media to isolate Venezuela.

Since February, the U.S. government has upped its economic, resource and diplomatic embargo on Venezuela with the hopes to dismantle the Nicolas Maduro administration.  Samuel Moncada said that the OAS is trying to create an unstable scenario in Venezuela and incite a new wave of violence in the lead up to the May 20th presidential elections that Maduro seems poised to win.

The diplomat said that Venezuela is being framed by the United States as having a humanitarian crisis, but that Washington is maintaining a blockade of $1.2 billion from getting into Venezuela and limiting the government from being able to pay for medicines and vaccines.

"The imperialist U.S. administration is provoking a military coup and committing a crime of placing financial restrictions on Venezuela," Moncada said. He ended his speech in front of the OAS by saying: "If you think you can squash the Venezuelan government you’re delusional."

Earlier this month, the U.S. Department of State released a report accusing Venezuela of human rights abuses to which Foreign Minister Jorge Arreaza posted a communique on social media saying that the United States government has no moral authority to make such accusations.  Arreaza stated: "The manipulation of the United States of America's regime on the subject of human rights with the sole objective of promoting the campaign of aggression and delegitimization of the national powers to justify its policy of 'change of government.'"