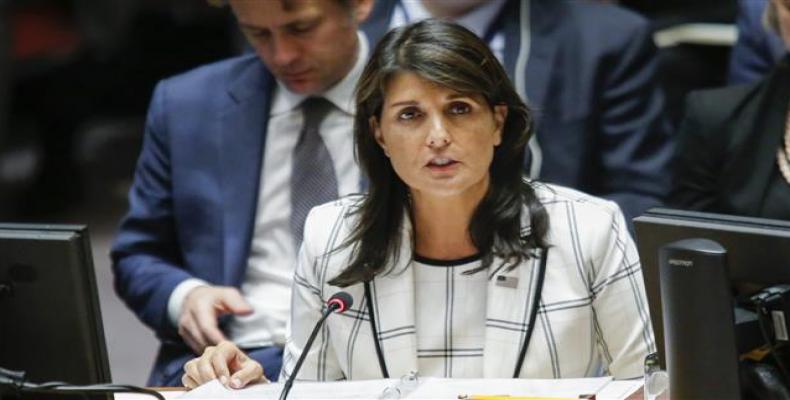 United Nations, June 1 (RHC)-- U.S. Ambassador to the United Nations Nikki Haley has said Washington will "unquestionably veto" a UN draft resolution calling for the protection of Palestinians in Gaza and the occupied West Bank.

After initially deciding to delay action on the measure, the Security Council was expected to finally go ahead with the vote on Friday.

Haley on Thursday called the text drafted by Kuwait on behalf of Arab countries as a "grossly one-sided approach that is morally bankrupt.”

Kuwait presented its draft two weeks ago that called for an international protection mission for the Palestinians.  A final watered-down version of the Kuwaiti resolution calls for "the consideration of measures to guarantee the safety and protection" of Palestinian civilians.
But even that weaker resolution is considered too much for Washington and the U.S. will veto it.

Haley defended Israel’s “restraint” at an emergency meeting of the UN Security Council before walking out of the room when Palestinian envoy Riyad Mansour began speaking.

At least 122 Palestinians have been killed by Israeli forces since the end of March.