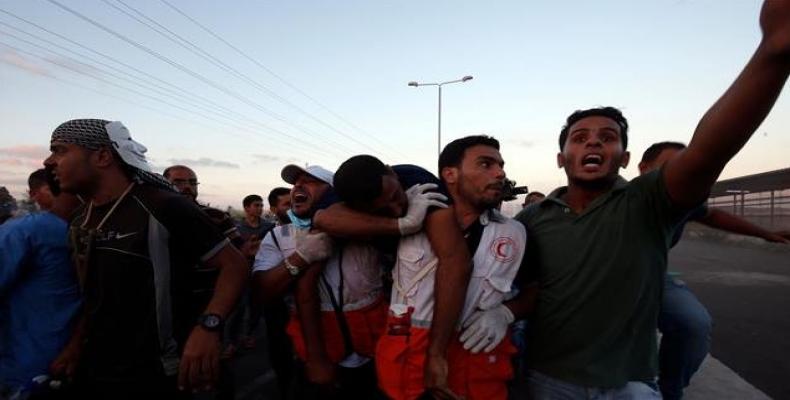 The Gaza Health Ministry announced the news in a statement on Tuesday afternoon, adding that 30 more protesters were also wounded in the live fire shooting by Israeli forces near the northern Gaza Beit Hanoun (Erez) border crossing with Israel.  It added that the two Palestinians, one of whom was identified as Mohammad Abu Naji, 34, had been shot in the head and chest.

In the early hours of Tuesday, two other Palestinians also lost their lives after an Israeli airstrike hit a locality near the separating fence east of the town of al-Qarara, located north of Khan Yunis.  Later in the day, the two victims were identified as cousins Naji Jamil Abu Assi, 18, and Alaa Ziad Abu Assi, 21.

Tensions have been running high near the fence since March 30th, which marked the start of a series of protests dubbed “The Great March of Return.”  Palestinian protesters demand the right to return for those driven out of their homeland.

Israeli fire has taken the lives of more than 180 Palestinians since March 30.  More than 19,000 Palestinians have also been wounded.  On June 13th, the United Nations General Assembly adopted a resolution, sponsored by Turkey and Algeria, condemning Israel for Palestinian civilian deaths in the Gaza Strip.

The blockaded strip has been under Israeli siege since June 2007, causing a decline in living standards as well as unprecedented unemployment and poverty.

Israel has also launched several wars on the Gaza Strip, the last of which broke out in early July 2014 and ended in late August the same year.  The Israeli military aggression killed nearly 2,200 Palestinians and injured over 11,100 others.