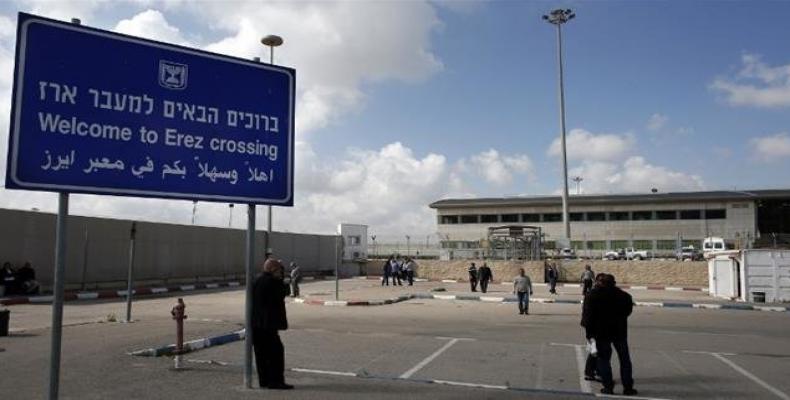 Gaza City, November 3 (RHC)-- Scores of extremist Israeli settlers have blocked a road leading to the Gaza Strip's main commercial crossing, in an attempt to prevent goods from entering the besieged Palestinian enclave.

According to the Palestinian Ma'an News Agency, dozens of Israeli settlers prevented truckloads of goods from entering Gaza through Kerem Shalom.  Israeli settlers held placards and chanted anti-Palestinian slogans.  They also linked the road blockade to fires from incendiary kites and helium balloons that have been flown by Palestinians since the “Great March of Return” protests began on March 30th.

The Kerem Shalom crossing between the southern Gaza Strip and the occupied territories is Gaza's main entry point for goods and trade.  The regime has routinely closed the crossing, banning the entry of humanitarian supplies and other goods into Gaza.

The coastal strip has been under a crippling siege since 2007 and witnessed three wars since 2008.  The Palestinian Resistance Movement, Hamas, says Israel's blockade amounts to a crime against humanity, and has called on the international community for immediate intervention.  Egypt, one of the only two Arab countries that have open relations with Israel, has blockaded the rest of the strip, including by shutting the Rafah border crossing.

Israeli troops opened fire on Palestinians who had gathered near the fence separating the Gaza Bank from the occupied territories in protest against the inauguration of the US embassy in Jerusalem.  Over 60 Palestinians were shot dead and more than 2,700 wounded by Israeli snipers who had been positioned along the fence.

Earlier this week, Israeli bulldozers escorted by regime forces demolished a Palestinian house that was still under construction in Anata town northeast of occupied Jerusalem.  Sources said that the demolished house belonged to a local resident, identified as Saleh Muhammad Fuheidat.  The demolition came without any previous notices, leaving a 7-member family homeless.