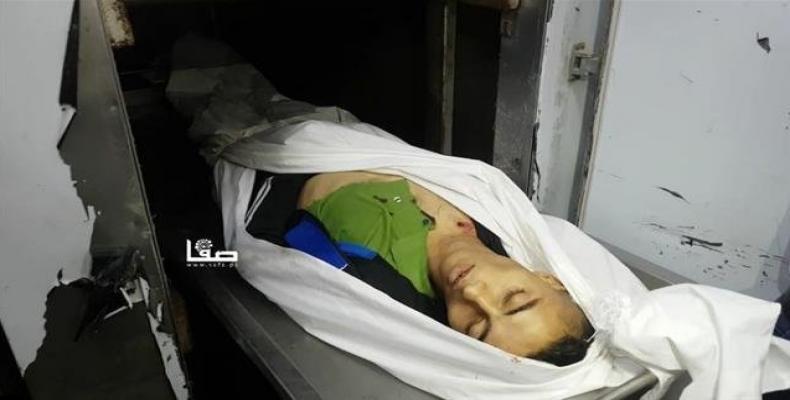 Gaza City, November 9 (RHC)-- Israeli forces have shot dead a Palestinian during clashes with protesters participating in anti-occupation rallies along the fence between the besieged Gaza Strip and Israeli-occupied territories.

A spokesman from the Gaza Ministry of Health said in a statement that the shooting took place east of Deir al-Balah in central Gaza.  The ministry named the victim as 'Alaa Abu Sherbin, a teenage boy.

On Wednesday evening, a Palestinian youth succumbed to the injuries he had sustained when Israeli military forces opened fire on an anti-occupation protest near the fence separating Gaza from the Israeli-occupied territories.

Ahmed Khaled al-Najjar, 21, from the Gazan city of Khan Younis died at the Ahli hospital in the West Bank city of al-Khalil (Hebron).

Tensions have been running high near the fence since March 30, which marked the beginning of a series of protests dubbed “The Great March of Return.”  Palestinian protesters demand the right to return for those driven out of their homeland.

At least 219 Palestinians have been killed by Israeli forces since late March.  The Gaza clashes reached their peak on May 14, on the eve of the 70th anniversary of Nakba Day (Day of Catastrophe), which coincided this year with the U.S. embassy relocation from Tel Aviv to occupied East Jerusalem.   Israel’s crackdown in Gaza left over 60 protesters dead in the impoverished coastal enclave on that day alone.

Angered by Trump’s move, Palestinian President Mahmoud Abbas boycotted his administration, saying Washington is no longer qualified to serve as the sole mediator in the decades-long conflict with Israel, and that an international mechanism should be devised to replace the US in the so-called peace process.

The Israeli regime denies about 1.8 million people in Gaza their basic rights, such as freedom of movement, jobs with proper wages as well as adequate healthcare and education.