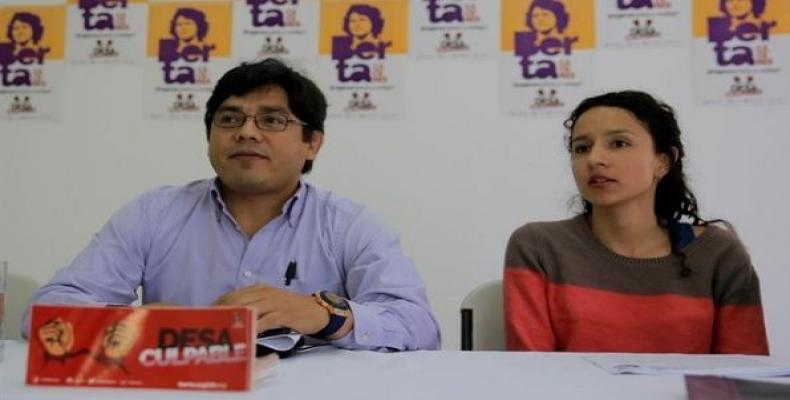 The group, which includes 28 non-governmental organizations, issued a joint statement calling on judicial officials and the state to ensure that the trail for the accused in Caceres' murder is impartial and transparent after a judge barred the private lawyers of the Caceres family from attending hearings.

“We urge the Public Ministry to guarantee an independent, impartial, and transparent process that will engage the intellectual and material authors of this terrible crime and secure justice for Berta,” the coalition said in a statement.

The coalition has specifically requested that Honduran judicial officials guarantee the "full" participation of Caceres’ family, the Civic Council of Popular and Indigenous Organizations of Honduras (COPINH), and lawyers in the trial against eight people accused of her murder in 2016.

Among the accused are Sergio Ramon Rodriguez, manager of Desarrollos Energeticos SA (DESA), in charge of constructing the hydroelectric dam Caceres opposed, Douglas Bustillo (former military man), and Sergio Rodriguez (military officer).  In March, DESA’s executive president David Castillo Mejia was charged with masterminding the crime but he will face a separate trial.

The statement also expressed deep concerned over “judicial decisions in Honduras that are limiting the rights of victims to participate in the trial.”

Last week, the trial resumed without the presence of the family’s lawyer. The court argued that the lawyers and Caceres family had abandoned the case because they did not appear to a hearing scheduled for Friday.  However, the family and lawyers did not appear because they had previously requested a new sentencing tribunal alleging bias.

Lawyers for the Caceres’ argued in their request for another group of judges and court to hear the matter that the current officials had shown “bias in their decision to limit the scope of the evidence to be reviewed to an extent that it could result in impunity.”

Berta Caceres was an Indigenous Lenca organizer and activist who fought for years against the construction of the Agua Zarca hydroelectric plant on the Gualcarque River, a project led by Desarrollos Energeticos SA (DESA).  Caceres was assassinated on March 3, 2016, in La Esperanza in western Honduras.  Gustavo Castro, a Mexican environmentalist, was also shot in the attack but survived.

The organizations, who have come out in support of the Caceres’ family, said the decision to dismiss her family’s lawyers was “arbitrary” and shows “the commitment of Honduran authorities to maintain the criminal structure responsible for systematic attacks against COPINH and for Berta’s murder in total impunity.”