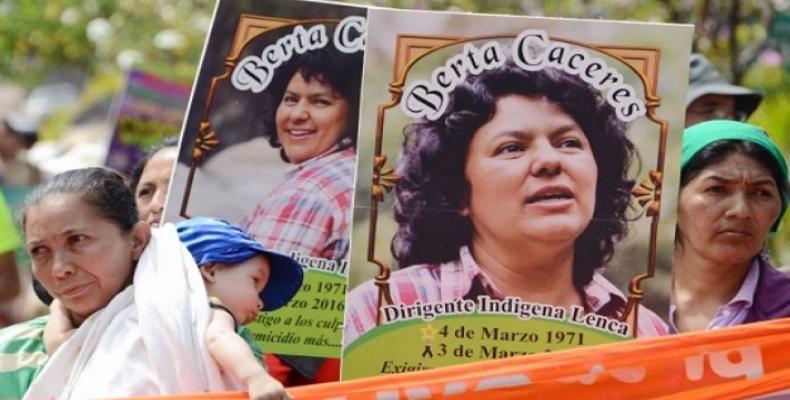 La Prensa Honduras says the man, identified as Henry Javier Hernandez Rodriguez, was arrested at a barbershop in the northern Mexican city of Reynosa.  Mexican authorities have not yet confirmed the report.

Caceres gained prominence for leading the indigenous Lenca people in a struggle against the Agua Zarca Dam, a controversial development project in the community of Rio Blanco that was put in motion without consent from local communities.  Caceres suffered dozens of death threats and was reportedly on the top of a U.S.-backed military hitlist leading up to her assassination.

So far, eight people have been arrested for their possible involvement in Berta Caceres' murder, who was shot dead in the early hours of March 3, 2016, at her home in the town of La Esperanza. On the day of her murder Caceres hosted Mexican environmentalist Gustavo Castro as a guest in her home, the only witness to the assassination who survived by playing dead after being shot.  Castro and Caceres’ family claim that the Honduran company Desarrollos Energeticos SA, better known as DESA, and the Honduran government hired contract killers to murder activists like her.

Last year, the United Nations Environment Program posthumously awarded her its Champions of the Earth Prize for her "action and inspiration" so that "her death would not be in vain."

A report by the Observatory for the Protection of Human Rights Defenders says human rights defenders in Honduras face killings, constant threats, and criminalization, making the Central American country one of the most dangerous in the world for human rights activists.

The Mexican digital outlet 24 Horas reported that Hernandez Rodriguez's capture was possible after several months of coordinated work between the police of El Salvador, Guatemala and Mexico