Trade unionists and Indigenous movements march against austerity in Ecuador 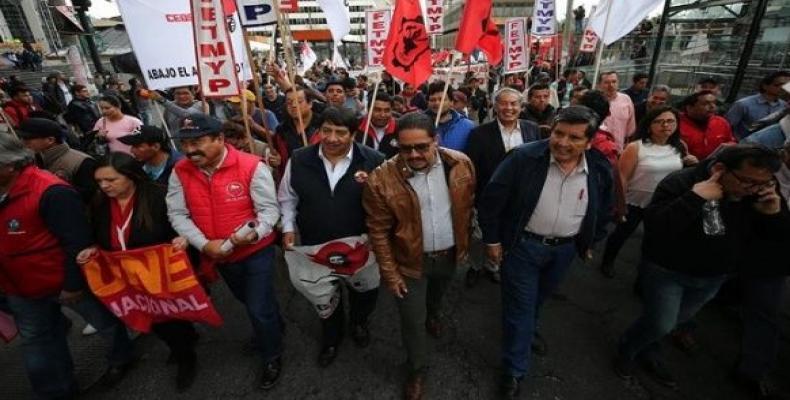 Quito, February 1 (RHC)-- Thousands of workers, led by the largest unions in Ecuador, marched through the streets of Quito and other cities to demand the government backtrack from the latest austerity measures and privatizations the government hopes to implement.

The Unitary Workers’ Front (FUT) called for the protest as other social organizations have been blocking roads in the country in protest to the administration of Lenin Moreno, under the banner “stop the neoliberal economic measures.”

Earlier this week, the Campesino and Indigenous Movement of Cotopaxi (MICC), backed by the Confederation of Indigenous Nationalities of Ecuador (CONAIE), blocked one of the main roads in the Cotopaxi province with the same objective, faced with police repression.

According to EFE, about 10,000 people marched in Quito to “defend Social Security” and demand the resignation of the presidential adviser Santiago Cuesta, who said that some state companies could be privatized soon.

One of those companies, the National Communications Company (CNT), has been described as the state-owned company with the highest profits.  The workers also protested against massive layoffs in private and public companies, demanding better salaries.

Jose Villavicencio, FUT’s current president, told EFE that the march was agreed between the unions, indigenous, campesino and social, movements.

If Moreno “doesn’t rectify and listens to the peoples’ demands… new actions against privatizations and the economic measures” will come in the next days, marking an emphasis on the recent increase in fuel prices.

He also denounced that Moreno is bowing to the policies recommended by the International Monetary Fund ‌(IMF), including a rise to retirement age.  "#DaysOfResistance road blocked in Latacunga protesting the economic measures. Indigenous, Campesinos and workers together in the popular struggle @CONAIE_Ecuador @confeniae1"

Nelson Erazo, another union leader, said the workers don’t agree with the government’s neoliberal policies.  Erazo criticized Moreno for ignoring the dialogue process he held with unions in the last months, in which workers presented him a series of proposals to overcome the economic difficulties the country is going through.

“We presented him proposals to solve the crisis, but none of them was accepted,” said Erazo. “If President Moreno wants to discuss that again, he first needs to let go the economic measures.”  He added: “What’s clear is that the strengthened unity between the indigenous movement, the unions and other social sectors in defense of the peoples’ rights."

Workers and farmers also marched in Guayaquil, a coastal city and the biggest in Ecuador; Cuenca, Latacunga and smaller towns across the three different regions of the country, answering to the call by the FUT, CONAIE and other organizations.

The government of Moreno argues that the austerity measures, especially the cut to subsidies, are necessary amid an economic crisis he blames on his former ally, ex-President Rafael Correa.

According to Ecuador’s Ministry of Energy, fuel and other subsidies cost the country about $50 billion over 40 years.  Moreno hopes the government can collect $400 million yearly by reducing them.