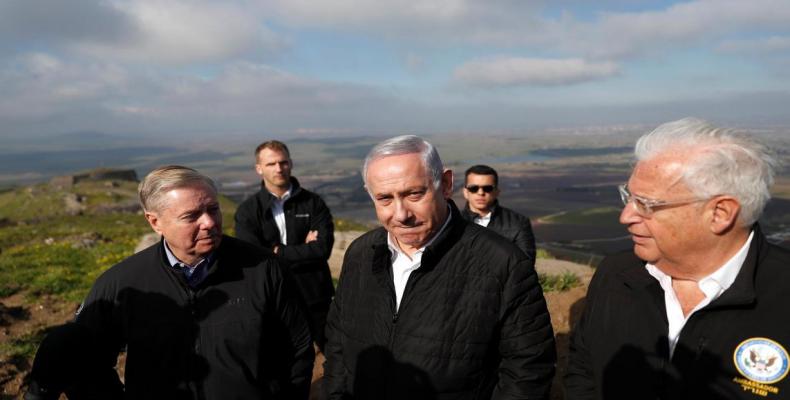 Washington, March 20 (RHC)-- In the latest annual global human rights report, the United States has stopped using the term “occupied” when talking about areas of Palestine controlled by Israel, including the Golan Heights, the West Bank and Gaza.

In a report by the U.S. State Department intended to detail data regarding human rights around the globe in 2018, Washington has decided to alter the words it uses to describe the situation in the Palestinian territories occupied by Israel, opting for what seems to be more neutral language.

This decision comes despite the fact that the word “occupation” is official terminology approved by the United Nations and how the US had formerly described the territories in question.

The report appears to reflect the sentiments of a meeting between Senator Lindsey Graham, US ambassador to Israel David Friedman and Israeli Prime Minister Benjamin Netanyahu on Monday, where the three discussed plans to work towards US recognition of the Golan Heights as a part of Israel.

Last November, the U.S. voted against a UN resolution condemning Israel’s occupation of the Golan heights for the first time ever. The vote was 151 to 2, with the U.S. and Israel the only opponents of the declaration.

Israel annexed the Golan Heights in 1981, a move condemned by the UN and rejected by the international community. UN Resolution 2334 calls Israeli settlement activity on the territory a “flagrant violation” of international law with “no legal validity.”